Tymoshenko fined for “contempt of court”Concern over new charges against prominent opposition figuresTymoshenko case to be raised at EU-Ukraine SummitLet’s see if this one sticks?Die Zeit: Dirty Tricks against TymoshenkoSelective EvidenceFirst persona non grata over politically motivated trials in Ukraine?President recognizes Kuzmin’s “personal contribution”US urges release of Tymoshenko and LutsenkoLutsenko’s appeal rejectedLutsenko appeal ruling likely on ThursdayEuropean Court of Human Rights upholds ruling against Ukraine in Lutsenko caseLutsenko demands medical examination outside prisonLutsenko loses civil suit against prison administrationBan on Lutsenko’s correspondence a flagrant violation of the lawLutsenko’s life could be in danger in prison colonyU.S. Government Statement Regarding the Verdict in the Yuriy Lutsenko TrialLutsenko sentenced to another 2 years restriction of libertyStill no aggrieved party, but prosecution demands 2.5 years for LutsenkoThe Criminal Prosecution of Lutsenko and Investigative Operations
• Activities / Political persecution in modern Ukraine 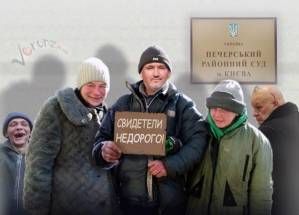 With just over a week remaining to the EU-Ukraine Summit in Brussels, the authorities could have tried just a bit harder.  Doing nothing would have been even better. Last week’s interrogation of “witnesses” did not just confirm all scepticism over Prosecutor General Pshonkas’ public claim to have evidence that imprisoned former Prime Minister Yulia Tymoshenko ordered the killing of MP and Donetsk businessman Eugene Shcherban in 1996.   It also graphically highlighted the embarrassingly caricature nature of the whole exercise.  It is almost better to believe they’re trying to sabotage the summit than to credit those in power with such lack of both finesse and intelligence.

Whether, as the Penitentiary Service claimed, Tymoshenko refused to attend the hearings or, as her lawyers asserted, she fully intended to but was not allowed, is of relevance given the fine she was meted out for “contempt of court”, but difficult to know.

She certainly missed quite a show.

Both of the first two “witnesses” in this somewhat baffling pre-trial investigation stunt acknowledged that they had never met Tymoshenko personally. Both were effectively repeating what others may, or may not, have said to them.

The first “witness” is the furthest to the right on the cartoon above, with the person in front holding a placard offering “testimony for cheap”. The Donetsk-based Internet publication Ostrov writes that it was unable to find any record of this person who claims that he had the closest links with the authorities, as well, seemingly, as with the criminal world. On the other hand, he appears to have been a witness for the SBU [Security Service] on a number of occasions, and from 2001 until 2010 was under SBU guard.

Maryinkov claims to have known the band responsible for killing Shcherban and to be repeating what they told him. Since they’re all dead, there’s no way of knowing, yet this does not appear to have bothered the investigators.

Tymoshenko’s defence lawyers asked why, in 2003 at another trial of killers from the same band he had not mentioned either Tymoshenko or Pavlo Lazarenko.

“There was no need”

“Why then have you now decided to give such evidence?”

“I think that the truth must sometime prevail”.

Journalists focused with relish on this witness with an appearance only equalled by his prison slang, and his suddenly demonstration of detailed knowledge about women’s designer clothes.  Asked by the defence what Ms Tymoshenko was wearing when he allegedly saw her in a hotel talking with one of the members of the gang, Yevgeny Kushnir. “I think she was dressed in a suit from Louis Vuitton. Her bag was from Chanel. No, the bag was from Gucci, and she smelt of Chanel perfume.”  Kommersant-Ukraine notes only that the Louis Vuitton collection dates from 1998, two years after the events described.  It would be interesting to find out how many people would be able to identify clothes in such a way.  Especially if they were remembering back 16 years after not having once mentioned Tymoshenko in connection with Shcherban’s murder.  Although that is, perhaps, unfair since Maryinkov did claim that he had tried to mention Tymoshenko (perhaps even described her designer outfits), and had been ignored.  As unprovable as anything else he came up with.

The second witness had, it transpired, been driven to court by “Stepan Bohdanovych” (the name and patronymich of the Prosecutor General’s investigator running the Shcherban case).  Serhiy Zaitsev came one – small – step closer  to giving anything that could be considered evidence -  by alleging that he was repeating the words of a person who is at least in theory still able to confirm or deny them.  He reports conversations with Petro Kyrychenko who was freed from prosecution and given leave to remain in the USA for testifying against Lazarenko.

Zaitsev’s performance would seem to have been no more convincing that that of Maryinkov’s.  There are, however, two additional points worth noting.  The defence made much of the fact that Zaitsev is at present a witness in a criminal investigation into a murder from 2003.   The case has not been terminated, as is so often the case in Ukraine where they are often pulled out and used as weapons.  Zaitsev, the defence asserts, knows that he could end up in the docks himself if he doesn’t make the right noises.

As reported recently, the situation with Kyrychenko is not dissimilar.  At the end of January the Pechersky District Court in Kyiv closed criminal investigations against him and unfroze his assets. This, Dzerkalo Tyzhnya wrote, came soon after Kyrychenko’s testimony appeared in the case around Shcherban’s murder.

Last year’s much-trumpeted, but less often applied, Public Information Act would unfortunately be powerless to inform the Ukrainian public how much of their taxes are being squandered on all aspects of this criminal case.  The money is urgently needed in every other sphere, while the task in this case is doomed from the outset.  With such timing and the witnesses thus far, they can whistle for anybody in the West, probably in Ukraine too, believing that in this new trial any of the players are driven by concern for the “truth to prevail.”