Carl Bildt:: Not East or West, just downwardsEU issues new warning on selective justiceTymoshenko case to be raised at EU-Ukraine SummitLet’s see if this one sticks?Die Zeit: Dirty Tricks against TymoshenkoSelective EvidenceFirst persona non grata over politically motivated trials in Ukraine?President recognizes Kuzmin’s “personal contribution”US urges release of Tymoshenko and LutsenkoLutsenko’s appeal rejectedLutsenko appeal ruling likely on ThursdayEuropean Court of Human Rights upholds ruling against Ukraine in Lutsenko caseLutsenko demands medical examination outside prisonLutsenko loses civil suit against prison administrationBan on Lutsenko’s correspondence a flagrant violation of the lawLutsenko’s life could be in danger in prison colonyU.S. Government Statement Regarding the Verdict in the Yuriy Lutsenko TrialLutsenko sentenced to another 2 years restriction of libertyStill no aggrieved party, but prosecution demands 2.5 years for LutsenkoThe Criminal Prosecution of Lutsenko and Investigative Operations
• Topics / Politics and human rights
• Topics / Freedom of expression

Not everyone was welcome to take part in President Yanukovych’s “Dialogue with the Country” on 22 February, with some of the methods for keeping people out comical, others simply worrying.

Most journalists and political analysts commented that the four-hour “dialogue” with President Yanukovych marking the third anniversary of his inauguration was a carefully staged show, broadcast on five national TV channels, where the President appeared “in the format he found most comfortable”.  Yanukovych has consistently avoided unscripted media encounters with his last press conference back in December 2011.  On that occasion, despite it coming just days before the first anniversary of the detention of former Interior Minister Yury Lutsenko and not long after the conviction of former Prime Minister Yulia Tymoshenko, there were extremely few hard-hitting questions.

According to Oleksandr Martynenko, Director General of Interfax Ukraine there was relatively little that could be conveyed as news to the agency’s readers. He highlights one of the main points as being the President’s assurance that gas prices for the population and business will not increase this year.  Since price hikes are demanded by the MF as a condition for any further loan, the statement is likely to have been noted in the appropriate quarters abroad. However, since the whole thrust of the “dialogue” seems to have been aimed at showing the President as concerned and involved in resolving the country’s problems as well as those of individuals, how much the words should be taken as unwavering policy can also be questioned.  Yanukovych also spoke of “progress” with the EU-Ukraine Association Agreement which could only have been for internal consumption. After all his attacks on “extremist displays and populism” from the opposition, as well as the lack of any specific commitment, rather the contrary, to releasing Tymoshenko and Lutsenko, came just three days before the EU-Ukraine Summit on 25 February at which politically motivated prosecutions are likely to be presented as the main – Kyiv-induced stumbling block to the signing of the agreement.

Worth noting in this respect that the parliamentary resolution reaffirming commitment to Euro-integration which MPs had worked on intensively for weeks was signed on Friday after all substantive commitments which would involve proper measures against these and other politically motivated prosecutions had been removed or massively watered down.  Under such circumstances the whole exercise in fine-sounding declarations seems a questionable use of MPs’ time.

While a press conference has been promised on 1 March, it is disturbing that certain journalists were physically prevented from being present at regional posts of this nationwide “dialogue”.

The Lviv newspaper “Express” reports that two burly men in plain clothes had used physical force to prevent their journalist Olha Pilishchuk from attending the direct broadcast from the village of Pnykut in the Lviv oblast. She says that she had previously shown her journalist ID to police who unofficially told her that they had been told to only allow people in who were on their list.  The journalist is planning to make a formal statement to the police regarding the attempt to obstruct her journalist work.

The situation in Odessa could not even be said to simply border on farce.  Journalists were long unable to find out where the studio was to be located.  Until, that is, it became abundantly clear from the huge number of police officers, Internal Forces men and even SBU [Security Service] officers, all strategically placed around a kindergarten.  One hopes the children were not frisked, but there’s no knowing. 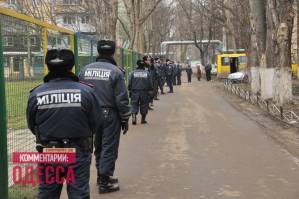 Journalists from Dumskaya.net were told that only those with invitations and medical certificates could be admitted to this “dialogue” with the people.

The head of police later explained that the security measures were due to fear of “provocation” from a number of political forces.

How many other security measures around the country were applied to prevent “provocation” can only be guessed.  In Kyiv there was conflict on Maidan Nezalezhnosti [Independence Square] with people angrily asserting that they were being stopped from asking questions.  This does not seem to have been the case in Kirovohrad where one actor used the occasion to express her deepest reverence for the President, thanking him for restoration of a theatre.