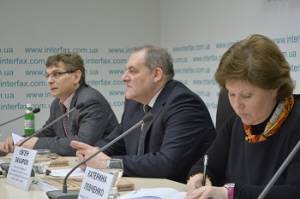 Human rights workers note that there were certain positive moves from the authorities as regards human rights protection. However wherever the country’s leaders saw a threat to their power or economic interests, they gave short shrift to those who, in their view, got in their way.

According to the authors’ research, in 2012 the use continued, or even intensified, of the Prosecutor’s Office, the Interior Ministry, SBU [Security Service], and tax officials as weapons of repression against the opposition and civic movements.

The judicial system remained totally dependent since control over the courts is a key condition for holding on to power. Not one recommendation from the Parliamentary Assembly of the Council of Europe [PACE] on judicial reform has been implemented.

Reforms did not bring any improvements

All the “reforms” – to the tax, pension, medical, administrative systems and other, as well as many current actions by the authorities (reduction in medical networks, educations and cultural establishments, bus routes, local and fast trains, etc) were aimed at reducing the public deficit at the public’s expense and without consideration of human rights.  This resulted in an increase in poverty and social inequality which is especially revolting given the incredible increase in political corruption and corruption of high-ranking public officials, the plundering or misuse of public funds. The accompanying pretence of fighting corruption through selective criminal prosecutions in fact only increased corruption.

The stifling of business, establishment of a criminal system of relations between business and those in authority is destroying the market, competition, freedom of enterprise and making property rights illusory.

The pension reform has not increased, but reduced pension payments while the deficit in the Pension Fund remained 7 billion UAH in 2012. Special pensions have still not been abolished.

Medical reform is effectively directed against patients and against doctors. In rural areas of the oblasts which are part of the experiment carried out, people, especially the elderly, can often simply not get to hospitals which are sometimes more than a hundred kilometers away.  Specialist doctors who are losing work in huge numbers due to the closure of their medical establishments are supposed to retrain within 6 months (in what other country would 6 months be sufficient to train as a pediatrician?) and find work in general practice – family practice. They moreover begin from the lowest band.

A flagrant example of laws which violate human rights were two laws passed on one day – the Law on the Principles of State Language Policy signed by the President despite wide-scale protest from very different groups in society, and the Law on Public Procurement which removes state enterprises from the obligation to hold tenders.

Another shocking example of a law infringing human rights was the law on the construction of two power stations at the Khmelnytski Nuclear Power Station submitted by the Cabinet of Ministers and passed by parliament despite decisions and warnings from dozens of public hearings within the 30 kilometre zone around the Khmelnytski Nuclear Power Station as well as the lack of agreement with interested countries.

The human rights representatives noted the unquestionably positive adoption of a new Criminal Procedure Code which despite numerous failings is much better than could have been expected, as well as some other laws on the bar and on civic associations.

The free legal aid is developing, with regional centres starting up from 1 January 2013. Unfortunately, however, the public funding allocated is enough for only 4 months.

The authors of the report consider another positive move to be the election of a young, energetic and progressive Human Rights Ombudsperson. In cooperation with the public Valeria Lutkovska has successfully begun building national preventive mechanisms for fighting torture and ill-treatment, mechanisms for parliamentary scrutiny of access to information and personal data protection; submitting recommendations to parliament on draft laws concerning human rights, some of which were taken on board.