Tymoshenko vs. Dead Souls and Dodgy WitnessesTymoshenko fined for “contempt of court”Concern over new charges against prominent opposition figuresTymoshenko case to be raised at EU-Ukraine SummitLet’s see if this one sticks?Die Zeit: Dirty Tricks against TymoshenkoSelective EvidenceFirst persona non grata over politically motivated trials in Ukraine?President recognizes Kuzmin’s “personal contribution”US urges release of Tymoshenko and LutsenkoLutsenko’s appeal rejectedLutsenko appeal ruling likely on ThursdayEuropean Court of Human Rights upholds ruling against Ukraine in Lutsenko caseLutsenko demands medical examination outside prisonLutsenko loses civil suit against prison administrationBan on Lutsenko’s correspondence a flagrant violation of the lawLutsenko’s life could be in danger in prison colonyU.S. Government Statement Regarding the Verdict in the Yuriy Lutsenko TrialLutsenko sentenced to another 2 years restriction of libertyStill no aggrieved party, but prosecution demands 2.5 years for Lutsenko
• Activities / Political persecution in modern Ukraine
• Topics / The right to a fair trial

Political Trials on the Career Trajectory 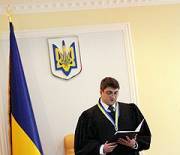 While politically motivated trials of opposition leaders have sent Ukraine’s reputation and chances of European integration plummeting, the judges involved are at present on an upward spiral.  The promotion of Rodion Kireyev to the post of acting Deputy Head of the Pechersky District Court in Kyiv comes less than 18 months after he sentenced former Prime Minister Yulia Tymoshenko to 7 years imprisonment over the 2009 gas accords with Russia.

In a recent investigation, TVi compared the biographies and career trajectory of previously obscure judges in prominent cases. They found that the judges have a lot in common.  All are around 30 and all were made judges of the Pechersky District Court after Yanukovych became President.  Only one judge involved in trials against former government officials has completed the requisite 5 years before being granted (or not) indefinite status as judges.

It is worth noting that in October 2011 the Venice Commission in its recommendations on amendments to the Law on the Judicial System was quite unequivocal on this point:

""During this first temporary appointment, judges have less room for independence from the political power, both executive and legislative. It should be ensured that judges in these temporary positions cannot be appointed to deal with major cases with strong political implications." (para. 49).

The excuse for ignoring this recommendation and similar concerns expressed by the Parliamentary Assembly of the Council of Europe was provided by the President’s Adviser Marina Stavnyjchuk and MP Serhiy Kivalov. Both claimed that there was a system of automatic selection which could not be bypassed.

Since Kireyev’s claim to notoriety is linked with just one case, albeit the most prominent, this is difficult to disprove .  The argument becomes impossible to take seriously when the track records of certain other judges are considered.

TVi reports that 30-year-old Oksana Tsarevych has issued 5 verdicts on opposition figures over the last two years. She was one of the panel of judges – together with (presiding judge) Serhiy Vovk and Anna Medushevska – who sentenced Yury Lutsenko, ex-Interior Minister and opposition leader, to four years imprisonment  on 27 February 2012. She recently also questioned one of the two witnesses who have so far appeared in the “pre-court examination” of allegations that Yulia Tymoshenko paid for the killing of MP Eugene Shcherban in 1996.  Tsarevych has only been a judge since 2010 and before that, the channel says, worked in a private firm linked with Andriy Portnov, former legal adviser to Tymoshenko, who joined Yanukovych’s Administration following the latter’s presidential victory.

Tsarevych’s colleague in the Pechersky District Court – 31-year-old Anna Medushevska – was appointed judge at the beginning of 2011.  Not only was she involved in the first gravely flawed trial of Yury Lutsenko, but she passed sentence in the second trial, where the alleged victim had told the court that he did not consider himself to have been aggrieved, and virtually every witness denied that Lutsenko had broken the law.  Medushevska ruled otherwise, sentencing him to two years imprisonment. She is now also involved in the new Tymoshenko case.

Another young judge would seem to be on his way to defying the laws of probability. Viktor Kyshchuk only began at the court last year, yet he has already been involved in the cases of both Lutsenko and Tymoshenko.  He recently rejected Lutsenko’s suit over the actions of the Prosecutor General’s Office and also questioned one of the main witnesses in the case against Tymoshenko over Shcherban’s murder.

Even if one ignores the advice of European experts, with 35 judges serving in the Pechersky District Court, the odds against these three getting more than one “opposition” case each under a real random selection system are enormous.

TVi says that the Prosecutor’s Office rejects any suspicions and claims that there have been no complaints from defendants.

Since the doubts also concern Judge Serhiy Vovk, the Prosecutor’s argument is feeble.  Vovk was presiding judge in the trials of both Yury Lutsenko and former Acting Defence Minister Valery Ivashchenko and he also authorized the detention of former Deputy Justice Minister Yevhen Korniychuk.  Repeated applications to have him withdrawn from at least the Lutsenko case were rejected by Vovk himself.

While Vovk is the only prominent judge in these opposition trials with indefinite status, there are other compelling grounds for questioning his independence.  LB.ua reports that a criminal case against him was initiated in 2009 over charges that he passed a knowingly wrongful ruling in a land dispute.  The decision to initiate criminal proceedings was soon cancelled.  Then in early March 2012 the Supreme Court reinstated it, only for it to again be revoked in April last year.

If the Venice Commission bases its recommendation on the obvious vulnerability of young judges who have not yet received permanent status, how much greater the leverage where a judge may – or may not – face criminal proceedings himself.

Vovk consistently rejected all applications to release Yury Lutsenko from detention, and during the trial turned down all applications to examine very serious allegations from witnesses about pressure brought to bear on them, distorted testimony and much more.

The European Court of Human Rights has thus far only examined a first application from Yury Lutsenko regarding his initial and ensuing detention.  The Court not only unanimously found that Lutsenko’s right to liberty had been violated, but, added a violation not mentioned in the application.  By finding violation of Article 18, the Court concluded that his detention had not only been to bring him “before the relevant legal authority on reasonable suspicion of having committed an offence, but also for other reasons”.  There have only been five rulings where violation of Article 18 was found, with the Court normally giving the authorities of a given country benefit of the doubt. In this case it found no such possibility.

The government’s only response has been to pay out the 15 thousand EUR awarded Lutsenko.  There is clearly no sign that the investigators, judge, etc involved in a case so damningly assessed by the European Court of Human Rights have in any way suffered for their actions.

Quite the contrary.  Vovk is no longer facing criminal charges, Kireyev has been promoted to a position few of his age and temporary status could hope for.  He has his own guard and would appear to be living a life incommensurate with his official statements of income.

The conclusions seem all too clear, leaving no room for doubt as to how “random” the selection of judges for the trials of opposition figures has been. Given the timing of Kireyev’s promotion, the new case against Tymoshenko, as well as attempts through another court to get her defender – Serhiy Vlasenko – stripped of his seat in parliament, the only real question mark hangs over the sincerity of any assurances given by President Yanukovych at the EU-Ukraine Summit on 25 February.