Prosecutor accused of corruption over Olaolu Femi casePeaceful protest in support of imprisoned Nigerian student stoppedQuestionable “witness” in the Olaola Femi trialThe Olaola Femi Case: Free Hand to Skinheads?One year on, still imprisoned for defending himselfSelf-Defence is No Offence!It’s criminals who should be in prison, not their victims!Nigerian held in detention for 6 months after being attackedTwo suspects in Luhansk racist attack caught in RussiaAlleged organizer of Luhansk attack on foreign students released from custodyLuhansk: Continuing run-ins between local residents and foreign nationalsLuhansk: Masked gang beat up foreign studentsOlaolu Femi finally released from custodyOlaolu Femi’s surreal difficulties continueOlaolu Femi: Suspended sentence for defending himselfNigerian student among latest to be abducted by militantsAnti-Semitism and xenophobia in Ukraine during April 201424. Rights of ImmigrantsHuman rights in Ukraine 2011. XIII. PROTECTION FROM DISCRIMINATION, RACISM AND XENOPHOBIAPolice measures to counter criminal manifestations of racism
• Topics / The right to liberty and security
• Topics / The right to a fair trial 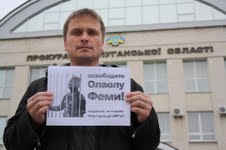 The latest hearing in the trial of Nigerian student Olaolu Sukanmi Femi has been delayed because the Prosecutor once again failed to find an interpreter.

Olaola Femi has been held in custody since November 2011 following an incident which the prosecution is claiming was attempted murder.  An attempt to murder five people with a broken bottle would already raise eyebrows, but there are many other worrying aspects to this case.

Olaolu Femi says that he used the bottle to defend himself after he and his friend were physically attacked and hurled racist abuse by five young people. In defending himself he lashed out with the bottle, hitting his assailants.  Three young men – V. Haman, D. Lemenchuk and A. Loboda received cuts to the arms, neck and head, while Iryna Pashkova who also took part in the incident was hit on the face and head.  Olaolu Sunkami Femi was arrested 12 hours later and has been in detention ever since.

The hearing scheduled for 20 March 2013 has now been postponed until 15 April because the interpreter into English called in by the Prosecutor the previous evening said that she did not know the legal language well enough and refused to continue. The hearing had lasted a mere 15 minutes and the interpreter was unable to even translate the application for a change in restraint measure. It transpired that she had no experience of interpreting.  The Prosecutor was given forty minutes to find another interpreter but was unable to do so.

The Postup Human Rights Centre points out that this gives the lie to the Prosecutor’s assertion that the investigative activities were carried out with trained interpreters present. Olaolu Femi has consistently stated that he was interrogated without a professional interpreter present, that he did not understand the people who were introduced to him as the interpreters, and that he doubts that his explanations were conveyed accurately.

Postup is convinced that the Prosecutor’s Office is dragging out the proceedings deliberately and putting pressure on Femi in order to get him to give the evidence which the Prosecutor wants.

The list of procedural infringements in this case is already long.

All the documentation was in Russian which Olaolu does not know well.  The Prosecutor claims that translations were provided verbally.  The name of the translator is not indicated everywhere, and at a certain point Olaolu simply refused to sign the documents.

Other irregularities have included changes in the number of supposed victims in the case, disregard for forensic medical evidence which found that Olaolu Femi was not, as claimed, inebriated, but that the five young people were.

There was also a highly questionable “witness” who appeared over a year after the event and Olaolu’s arrest (see http://khpg.org/1352581501 for more details).

Postup and a number of other human rights organizations have called on the Prosecutor General and the Human Rights Ombudsperson to intervene in this shocking case.

A petition in support of Olaolu Femi can be signed here