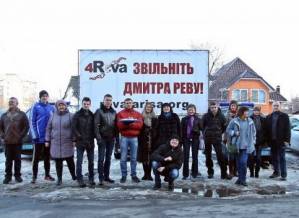 From a protest in support of Dmytro Reva

The Shevchenkivsky District Court in Kyiv has ordered the State-owned UTV-1 to issue a retraction and apologize to Dmytro Reva, one of the four men facing charges over the bomb blasts in Dnipropetrovsk in April 2012.

On 18 October 2012 UTV-1 broadcast a film entitled Hades Hell about the bomb blasts in Dnipropetrovsk in which it distorted confidential information from the criminal investigation and made up information about Dmytro Reva.  Mr Reva’s lawyer V. Pohosyan says that UTV-1 has been ordered to retract the claims that Reva was a terrorist and that he had sent text messages about people dying.

The channel has been ordered to provide broadcasting time over the next week to the company which produced the film in order for the incorrect information to be refuted.

As reported, there are serious grounds for concern over the charges against at t least two of the men charged over the bombs in Dnipropetrovsk in April 2012.

The four explosions coincided with major national and international coverage of Yulia Tymoshenko’s allegations that she had been mistreated by prison staff.  The explosions did not kill anybody, but 31 people were injured.

On 31 May, shortly before the beginning of Euro 2012 which Ukraine was co-host of, it was announced that 2 suspects had been arrested for allegedly demanding four and a half million dollars or else they would continue to plant bombs.  On 1 June it was announced that 4 people had been arrested and remanded in custody.  Viktor Sukachev is a Senior Professor of Political Science at the Dnipropetrovsk National Universiity and Vitaly Fedoriak is an Assistant Professor.

Dmytro Reva says that the police applied torture and psychological pressure.  He asserts that he was held for several hours with his legs half in splits position and his arms raised. One of the SBU [Security Service] officers, he says, threatened to show him how fragile the human body is, while offering to bring coffee and cigarettes if he confessed.