No Miracle, No Justice 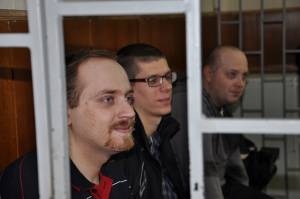 On Tuesday 2 April Judge Volodymyr Minasov issued a guilty verdict in the trial of three young men charged with the 2010 Zaporizhya Church bomb. Two sacristans of the Church - Anton Kharytonov and Yevhen Fedorchenko – have been sentenced to 15 years imprisonment, and Anton’s brother Serhiy Dyomin to 14 years.

As well as journalists, there were many residents of Zaporizhya who’d come to express their support for the three men.  The courtroom couldn’t fit them all.

Today’s verdict was a test for the judges involved – one that they failed.  None of this unfortunately, was unexpected.

The verdict will be appealed and all legal avenues exhausted in Ukraine.  Then, if necessary, justice will be sought – and found - at the European Court of Human Rights

Today’s judgement is profoundly frustrating in part because the Court in Strasbourg’s position does not need to be guessed.  It was clearly articulated in the case of Zamferesko v. Ukraine from 15 November 2012.  Since Viktor Zamferesko’s “confession” had been beaten out of him, ““the use of this confession to obtain the applicant’s conviction automatically rendered the whole criminal proceedings against him unfair.” (71).

Three men were convicted today of a crime where the only evidence is their multiple and contradictory “confessions” which all have retracted and have said were obtained through physical and psychological pressure.  Two authorized forensic psychologists have confirmed that the men were placed under severe psychological pressure during the formal interrogations and investigative activities

Other grounds for serious concern about the seven confessions which have been used to justify 14 and 15-year prison sentences can be found here and in the other material listed.

Formal complaints about the “defence lawyers” called in to be present and sign protocols during the first night interrogations were upheld by the relevant qualification commission which reprimanded one lawyer and stripped two others of their right to practise for six months. During those critical days the men were thus effectively denied legal defence.

All other formal complaints have been bounced back and forth between different government bodies, the Human Rights Ombudsperson and parliamentarians.  The European Convention obliges member states to ensure effective investigation into all allegations of torture.

There has been no such investigation and Judge Minasov has consistently ignored or blocked all applications from the defence.  These included the obvious wish to question all forensic psychologists after the third assessment which he initiated denied the pressure identified so clearly in the first two assessments and instead spoke of the men’s “leaning to crime”..  Minasov rejected the application, while focusing on the third assessment in his verdict.  He was equally unperturbed by the prosecution’s amendment, two years into the trial, of the indictment removing, among other things, the time frame which gave all three an unbreakable alibi.

Even in a country whose law enforcement bodies are notorious for forcing “confessions” and where the acquittal rate has plummeted to 0.2 % of all court verdicts, the irregularities in this case are staggering.

In an signed by a number of former political prisoners, lawyers, journalists and concerned members of the public, we asked representatives of the EU to raise this issue with Ukraine’s leaders given the very serious concerns over this case, and the destructive effect on Ukrainian society of any trial whose outcome is widely seen as connected with factors unrelated to the guilt or innocence of the defendants.  The fact that the prosecutor and judge have stubbornly insisted on such a verdict confirms fears that the assurances given President Yanukovych on television by the then Interior Minister that the culprits had been found have been deemed to outweigh the cause of justice.