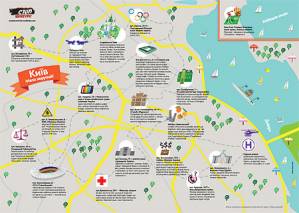 Natalya Sokolenko, journalist and member of the civic movement Stop Censorship points out in a blog entry that the President’s highly controversial residence at Mezhyhirya is drowning in lies, not water.  Ever since Yanukovych became President, journalists have been trying to see Mezhyhirya which was once a State residence, not private property.  The President’s promise to show them the vast estate has not been kept with only a selected group of trusted journalists being shown a restricted part of the premises. At the same time, planned peaceful protests have consistently been banned.

Natalya Sokolenko says that last year the excuse for banning a Stop Censorship protest was fear that an explosive device had been planted, this year it’s flooding.  Such a prediction, specifically for 10 April, is apparently contained in the court judgement banning a peaceful protest on that day by the Democratic Alliance.  The latter planned to call on the President to pay attention to the state of the roads, improving safety and quality.  The President himself appoints and dismisses the head of the relevant road transport department.

The protest, however, is not to be since the Kyiv District Administrative Court presumably has insider information regarding an anticipated flood and need to fight the elements on that same day.

The Democratic Alliance are adamant that they will put their demands to the President, if not in Novy Petrivtsi (near Mezhyhirya), then in another place. Maxim Panov from the Alliance says that if money for roads has been siphoned off, the President must answer since he appoints and dismisses the person in charge.

Natalya Sokolenko points out that the post address Mezhyhirya belongs to a civic organization called the Kedr Society of Hunters and Fishermen.  This was registered on 12 November 2008, after Mezhyhirya had been transferred to private property.  Kedr is closely associated with Viktor Yanukovych. It was officially founded by three members of the Party of the Regions – Yury Boiko, Serhiy Tulub and, wait for it, Volodymyr Demishkan.

As reported in June last year, the Kyvi District Administrative Court had already banned a peaceful gathering once before.