Fast track „pardon”Lutsenko to receive “pardon”?EU condemns rejection of Lutsenko cassation appealLutsenko case: Doors opened and closedKwaśniewski – Cox Commission call for Lutsenko to be pardonedGrybauskaite: Association Agreement linked with Tymoshenko and LutsenkoFüle: Bans on Ukrainian officials not discussedKwaśniewski - Cox Mission: More questions than answersLutsenko calls for Association Agreement to be signedConcern and anger over break in Lutsenko’s hospital treatmentLutsenko moved without warning soon after operationLutsenko not allowed visits from his wife / defender or other lawyersLutsenko prevented from seeing his wife before his operationWho is delaying Lutsenko’s second European Court judgementTwo Year Mockery of the Rule of LawApplication to release Lutsenko on health grounds rejectedCourt hearing or ploy to keep Lutsenko away from the public view?Relatives report that Lutsenko needs intestinal surgeryLutsenko may undergo surgeryAssociation Agreement without release of Tymoshenko & Lutsenko "unlikely"
• Activity / Political persecution in modern Ukraine

Lutsenko: Tymoshenko must now be released 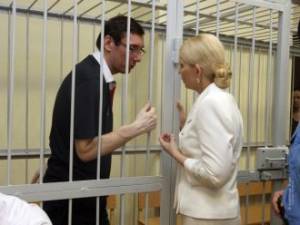 Former Interior Minister Yury Lutsenko, released from prison yesterday, has said on TVi  that by releasing him, the regime has created a precedent and should now also release Yulia Tymoshenko. Tymoshenko must not be imprisoned on trumped up charges.

“I think that those in power have made such a step as a precedent, and there are no arguments why such a step can be taken in the case of Lutsenko, but can’t be with respect to Tymoshenko”

In the joint statement issued by EU High Representative, CatherineAshton, and Commissioner Štefan Füle on the pardoning ofYuriy Lutsenko, Yulia Tymoshenko is not mentioned by name, however the call is made to ensure an end to all selective justice.

Their statement in full:

“We salute that President Yanukovych has exercised his prerogatives of pardoning in the cases of former Interior Minister Yuriy Lutsenko and former Environmental Protection Minister Heorhiy Filipchuk. We welcome the release from prison and return to his family of Mr Lutsenko on Sunday.

This in an important step by the Ukrainian authorities in addressing the concerns regarding the matter of selective justice. We commend the important contribution the European Parliament’s monitoring mission to Ukraine headed by former Presidents Cox and Kwaśniewski has made in this context.

We now look forward to Ukraine addressing without further delay the outstanding case of selective justice and preventing any recurrence of selective justice by a comprehensive judicial reform in line with European standards, in order to fully implement the conclusions of the 10 December 2012 Foreign Affairs Council and the joint statement of the 25 February 2013 EU-Ukraine Summit”.