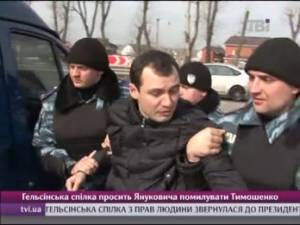 A TVi film crew, who went together with Democratic Alliance activists, to investigate how the authorities were fighting the flood used as justification for banning yet another peaceful demonstration, encountered problems from the police, not the elements.

Anastasia Stanko, the journalist who went, together with cameraman Kyrylo Lazarevych says that on their arrival there were around 20 police officers who wrote down the numbers of the car; checked their documents; and scanned her passport. “In answer to my question about why they were checking the documents, they say that they were searching for a robber and I had similar features”

After this another 15 Berkut riot police officers arrived, together with the head of the Village Council.

“They told us that we couldn’t hold a protest, yet we hadn’t come to hold a rally, but to photograph the consequences of the flood and help eliminate them. However we were told that there was nothing to eliminate”, Ms Stanko said.

After two presidential corteges had sped past the journalists, the police officers began trying to block and grab at their cameras.

“They didn’t allow us to photography, blocked the cameras, threatened that they’d take us to the police station, claiming that we were infringing traffic rules”

She is adamant that they weren’t disturbing anybody, and the officers pushed and grabbed them by the arms as they tried to film.

After finishing the filming the journalists and members of Democratic Alliance were stopped at the turn onto the road to Kyiv and the activists were taken away.

At least four activists were detained and taken to the Vyshhorod Police Station, and accused of infringing the rules for holding rallies and disobeying police officers.  The four known are: Maxim Panov; Oleksandr Boikul; Andriy Bohdanovych; and Vasyl Hatsko.

As reported, the Democratic Alliance had planned to hold a peaceful protest on 10 April near the controversial estate Mezhyhirya which is now his residence.. They were hoping to call on the President to pay attention to the state of the roads, improving safety and quality.  The President himself appoints and dismisses the head of the relevant road transport department.  Maxim Panov from the Alliance says that if money for roads has been siphoned off, the President must answer since he appoints and dismisses the person in charge.

As has become standard, the Novy Petrivtsi authorities applied to the Kyiv District Administrative Court which banned the gathering on the grounds of a supposed flood the consequences of which needed to be fought that day.