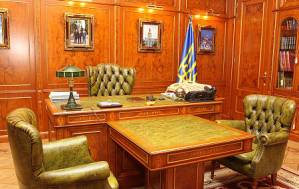 During 2012 the President’s Administration paid 100 thousand UAH to Tantalit - a firm believed to have links with the Yanukovych family -  for renting an office for Viktor Yanukovych in the latter’s sumptuous residence at Mezhyhirya.

The President’s Administration was responding to a formal information request from the Internet publication Ukrainska Pravda. The latter notes that just one table lamp in this office cost 10 thousand US dollars.

The amount confirmed is, in fact, 99 thousand 691 UAH.   It should be noted that amounts under 100 thousand do not need to be put to tender.

The contract is to the end of 2012 but with the possibility of being extended to 2020.  The money is paid from public funding.

The President’s Administration has refused to provide a copy of the contract itself, on the grounds that one of the parties is another legal entity and they don’t have permission from them to provide the contract. . They do, however, confirm that the contract is between the Director of the Tantalit Limited Liability Company and the head of the relevant department of the State Department of Affairs [“DUS”, the Ukrainian title is no better).

The Director of Tantalit is Pavlo Lytovchenko, a Party of the Regions Deputy of the Kyiv Regional Council.  Ukrainsa Pravda says that according to their information, Lytovchenko is an authorized representative for the Yanukovych family.  He has, for example, authority from Yanukovych’s younger son, and in recent years worked as a lawyer in firms owned by his elder son.

The real owner of Tantalit is hidden through all sorts of offshore intermediaries.  The 90% founder of Tantalit was the Austrian firm Euro East Beteiligungs GmbH which was created by an Austrian broker company whose director is presently facing criminal investigation in Vienna and a British companies whose shares are hidden away in Lichtenstein.

Ukrainska Pravda reports that previously the shareholders of Tantalit included a company which last year leased the President’s Administration a helicopter and airplane  for Yanukovych’s needs.

There has been considerable controversy over Mezhyhirya which was effectively privatized by Viktor Yanukovych at the end of his term as Prime Minister in 2007.  The estate is originally a state residence.

Viktor Yanukovych publically promised to show journalists the heavily guarded estate back in June 2010.  This promise has not been kept, and all efforts by, for example, Stop Censorship to organize peaceful protests outside the residence’s gates to remind him of the promise have been stopped by court bans.

This barricade mentality escalated earlier in April 2013, when activists from Democratic Alliance, together with TV journalists tried to check out the spring flood used in the latest court ban as pretext.  There was no flood, just a large number of police and all activists were detained.  Over the following two days, one – Maxim Panov – was imprisoned for 7 days, another – Vasyl Hatsko – for five.  The latter had gone to protest – peacefully – at the jailing of Maxim Panov.

On 19 April a TVi crew were briefly detained outside Mezhyhirya.

It should be noted that at the time TVi provided virtually the only television coverage of this shocking course of events.  Just days later this looked likely to change and not, unfortunately, because other television channels took up the story.  On 23 April one of tTVi's presenters, Artem Shevchenko announced that he was the new General Director, and introduced Alexander Altman as the new owner.  Although ownership is in dispute, over 30 journalists have left the channel and ifew expect the channel to continue its hard-hitting investigations and relatvely independent stand.