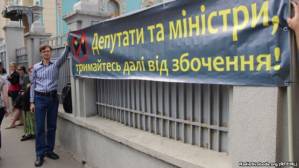 One of a number of remarkablly professional-looking banners which reads: "Deputies and Ministries, stay away from perversion""

Following months of protest from civic organizations over a thoroughly inadequate anti-discrimination bill, the same document has aroused indignation and seriously inflated claims from groups claiming to be protecting family values etc and see the law as “defending” homosexuality.

Civic organizations have been angered by an anti-discrimination bill which they see as having no bite and there merely to simulate compliance with EU requirements for visa liberalization.  These objectives have largely gone unheeded.

The bill was due for consideration on 14 May but deferred for around a week.  The decision to postpone consideration of the bill was met with loud approval by the approximately 100 protesters outside the Verkhovna Rada.  Their banners suggested that they saw themselves as against “perversion”.  At one point they were joined by Vadim Kolesnichenko, Party of the Regions MP and author of a bill very similar to that passed in Russia prohibiting what is authors call “promotion of homosexuality”.

There are threats from the same protests to disrupt a demonstration planned for 25 May.  Sviatoslav Sheremet, Head of the Gay Forum, that the claims that the action planned for 25 May is a Gay Pride March is already wrong, that a modest demonstration in support of the right to not face discrimination on the grounds of sexual orientation is planned.

Sheremet adds that the claims about the draft bill are also inflated. The bill simply adds prohibition of discrimination on the basis of sexual orientation, i.e. that a person cannot be fired, refused promotion etc because they’re gay or lesbian.