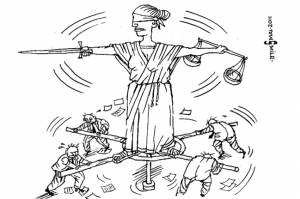 Ukrainian advocates have become the latest targets in a concentrated drive over the last three years to create a malleable and dependent judiciary. The measures being applied to remove dissident voices and intimidate others bear stark resemblance to those which have already succeeded in Belarus

With the latest crisis to hit Ukraine’s already beleaguered justice system involving advocates skilled in arguing their case, an outside observer could feel tempted to simply leave them to it.  For many that seemed the only option back in November 2012 when a founding congress of Ukrainian advocates effectively split into two with both congresses claiming sole legitimacy.  Looking away, however, ceases to be an option when adversarial eloquence is replaced by an arsenal of disciplinary measures, and opponents of the body with official backing have their licences revoked and could even face criminal proceedings.

These measures have prompted statements of concern from the Ukrainian Helsinki Human Rights Union, and Belarusian former advocates.  The latter’s response is of particular poignancy since they are now speaking out in defence of Ukrainian colleagues who supported them in a similar battle in 2011.

The battle in Belarus was effectively lost making their words of warning particularly chilling.

As of May 2013, at least 20 Ukrainian advocates, some of them prominent members of qualification committees, etc, have been stripped of their licence and one or two threatened with criminal prosecution.  All were involved in what is now called an “alternative congress of Ukrainian advocates” on 17 November 2012 at the Kinopanomara Cinema.  The term “alternative”, however, is as much in dispute as the legitimacy of the original congress, scheduled and held in the Rus Hotel.

In an open appeal on 23 November, advocates from the Kharkiv oblast delegation stated that there was in fact one congress organized by the High Qualification and Disciplinary Bar Commission which was forced to continue its work at Kinopanorama after the Congress was effectively hijacked by a group of Kyiv and Donetsk advocates.  The authors assert that this group carried out selective registration of participants in the Congress and that there were blacklists used by unidentified individuals at the entrance to stop certain advocates from getting in.

This scenario, it should be noted, was seen in December 2011 following mass protests throughout the country by former Chornobyl clean up workers.  Precisely such means were used to ensure “election” of certain more malleable figures to the leading positions in the Chornobyl Union of Ukraine. This basically reduced and marginalized a protest movement which enjoyed strong public support.

On 17 November some of the advocates stayed at the Rus Hotel Congress and apparently elected Lidia Izovitova Head of the National Association of Ukrainian Advocates. Various media publications had suggested prior to the congress that iLidia  Izovitova, who is Deputy Head of the High Council of Justice had strong backing from Andriy Portnov in the President’s Administration.

According to the Kharkiv oblast advocates, most of the delegates to the founding congress – 20 delegations from different regions – took the decision to hold the congress at Kinopanorama.

That congress unanimously elected Volodymyr Vysotsky, for many years head of the High Qualification and Disciplinary Bar Commission and a practising advocate.

Various delegates from that congress have also publicly criticized certain aspects of the Law on the Bar.

On 5 April 2013 the Kyiv Qualification and Disciplinary Bar Commission stripped Volodymyr Vysotsky of his licence to practise as an advocate.  As reasons it cited his participation in the “alternative congress” and his having publicly queried certain decisions taken.

He is not by any means the only participant of the congress held in Kinopanorama to have had their licences revoked or have faced other disciplinary measures.  One court ruling has even spoken of actions of a criminal nature.  A tentative list of those who have thus far faced such penalties is given in theUHHRU statement.

Advocates who openly express views critical of the “official” line appear to also be coming under fire. According to the Internet publication Yuridicheskaya Praktika, opinions expressed to the media are leading -  in depressingly Soviet style -  to complaints provided by obliging advocates to the Head of the High Qualification Commission.  Now it would seem, advocates writing on social networks may also be targeted.  Letters are shown from one Kyiv advocate, Andriy Tsyhankov and approving response from Lidia Isovitova.  Tsyhankov expresses indignation over the supposedly inadmissible language and offensive statements expressed on such networks and demands that measures be taken.

And in Soviet style, we can assume that “measures” will be taken until most advocates are cowered into silence or prevented from practising their profession.

In the above-mentioned letter of support, former Belarusian advocates wrote that the indifference of most advocates in Belarus had allowed a disastrous new Law on the Bar to be passed which strips advocates of their independence and “turns the Bar in Belarus into a structural department of the Justice Ministry”.

The results of the 2010 “judicial reform” in Ukraine have already been catastrophic, with judicial independence seriously curtailed and an acquittal rate dangerously near zero.  Judges who acquit defendants, cite European Court of Human Rights case law, etc, can face disciplinary measures; accusations of breach of oath (leading to dismissal).  A major role in this is played by the High Council of Justice of which Lidia Izovitova is Deputy Head.

The stark words of warning from Belarusian advocates should not be ignored. Close attention and support from advocate organizations in other countries, and all those who want to see rule of law in Ukraine are urgently needed.