Only 183 MPs have revealed income declarations 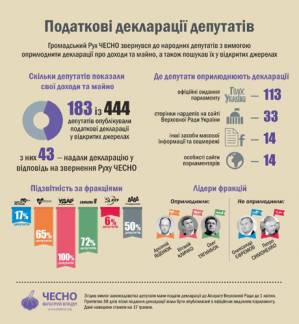 The civil movement CHESNO reports that only 183 MPs have published income declarations in open sources.  The other 261 MPs have not published them, nor did they make them available when requested by CHESNO.

Legislation stipulates that the declarations be submitted to the Office of the Verkhovna Rada by 1 April.  The declarations should then be published in official publications within the next 30 days.

CHESNO found only 153 declarations which had been published during the legally stipulated period and another 30 which appeared after 1 May.

The best observance of legislative demands was seen from UDAR – all 42 MPs provided declarations;

62 MPs, this being 65% of the total number) of Batkivshchyna faction MPs ;

16 out of 32 officially non-affiliated MPs;

2, or 6% of the total number of Communist Party MPs submitted declarations.

Neither the leader of the Party of the Regions (Yefremov) nor of the Communists (Symonenko had published their declarations by 17 May.

Unfortunately, the point of such declarations, even when submitted, is questionable since the amounts supposedly received in income after wildly different from the amounts their watches, vehicles, homes etc would cost. (more information here: