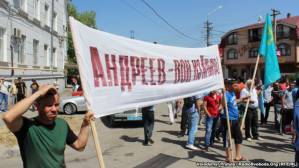 Protest in the Crimea calling for Andreev to go

His resignation is, however, in protest at criticism of him for his remarks from the Russian Foreign Ministry.  The latter acknowledged that Andreev’s remarks had been “incorrect” and without “proper condition for the sensitivity of the issue”

Andreev told Interfax Ukraine on Friday that he held to every word of the opinion expressed, and called the Russian Foreign Ministry’s statement as a disgrace to the Russian Federation.  Asked whether his (extremely critical) utterances about the Russian Ministry’s position did not place his post in jeopardy, he said that yes, and that he was leaving altogether, asserting that this was his “principled decision”.

Lenta.ru noted on Friday evening that the situation may be a little more complex.  It pointed out that Konstantin Zatulin, currently Director of the Institute of CIS Countries, who has a very specific reputation in Ukraine due to various utterances made over the years about the status of Ukraine as a whole, ethnic Russians in it, and the status of the Crimea, had recently visited Ukraine.  During the visit, he apparently predicted that Andreev would be replaced in June.

As reported, there was outrage from Crimean Tatars and many other Ukrainians over the shocking comments made by Andreev in an interview. There were calls for his dismissal and removal from the Crimea.  Ukraine’s Foreign Ministry on this occasion responded quite firmly.

Andreev basically regurgitated all the lies used by Stalin as pretext for the Deportation of 1944 about supposed collaboration as a people with the Nazis.

This is 47 years after the Soviet Decree which officially acknowledged that: ““After the liberation of the Crimea from Fascist occupation in 1944, accusations of active collaboration of a section of the Tatars resident in the Crimea with the German usurpers were groundlessly levelled at the whole Tatar population of the Crimea. These indiscriminate accusations in respect of all the citizens of Tatar nationality who lived in the Crimea must be withdrawn, the more so since a new generation of people has entered on its working and political life”.  (The text in English can be found in full here)”

While the firm response from both the Ukrainian and Russian Foreign Ministries are unfortunately unusual enough to make the Lenta.ru comments seems plausible, the comments were undoubtedly deeply offensive, slanderous and would have made his continued tenure a positive affront.