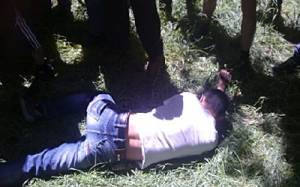 In Brovary (Kyiv oblast) Andriy Kachor, journalist from the website “You have the Right to Know”, was beaten up during a protest at the Peremoha [Victory] Park.

“I went as a journalist to the action aimed at dismantling the fence at Peremoha Park. I was preparing a video report.  When the scuffles began between participants and the police, one of the men tried to pull me away.”

He says that he explained that he was a journalist but this did not stop his assailant. “I continued filming and the man became rougher in dragging me away from the site. I reminded him about Article 171 (of the Criminal Code  – translator) and the possible consequences of legal liability for obstructing a journalist carrying out his work.  He punched me in the face and I lost consciousness”

Not many saw the assault since they were all filming the detention of activists, and he and his assailant were several metres away. However there is video footage of the attack.

Andriy Kachor has reported the incident to the Brovary Police Department in which he stresses that he was there as a journalist. He has also undergone a forensic medical examination. Kachor says that the protesters have identified the assailant and persuaded the police to detain him.

The protesters were demanding that a fence put up by a private business owned by Prime Minister Azarov’s masseur, Serhiy Fedorenko, be removed.

Ukrainska Pravda reports that the police were observing the actions of the protesters. Then some athletic bodybuilder types turned up and quietly joined the crowd, and then the fight began.

The events on 18 May (see the links below) highlighted the frightening degree to which these “sportsmen”, or more accurately, thugs are increasingly being hired to beat people up and / or provoke trouble during peaceful protests, as well as to carry out seizures of property, etc.  Such thugs were also used in some of the most scandal-filled constituencies in last year’s parliamentary elections.

Photo from Ukrainska Pravda, report from Institute for Mass Information