Police officer gets long sentence for raping detaineePolice officers accused of torturing a detainee still at workSix former police officers sentenced over the killing of a detaineeNine prosecutions over the death of a detainee passed to the courtProsecutions over the death of a detainee in PrylukyHead of a Regional Department for Fighting Organized Crime dismissed over the death of a detaineeFirst suspects identified over the death of a man detained in custodyDetained man dies under suspicious circumstances in police custodyDangerous police PR methods110 days in the torture dungeon — Anti Terrorist Operation (ATO) member talks about torture in the Kupiansk temporary detention center‘My mom wanted to take poison, but she learned from a letter that we were alive.’ The story of a doctor from Mariupol, part 2Ukraine’s penitentiary institutions and the war‘There was a human being, and the body was torn apart in an instant’ — a Mariupol graduate who went through hell‘Stand up for your convictions, even if you stand alone!’ Anti-war activities in Russia, 3-9 OctoberVovchansk Engineering Works: Dungeons on the Chechen Model‘I don’t want to see them in the dock. I want to see them dead,’ a man from the Mariupol Drama Theatre says“Do You Still Want This War?” Anti-War Activities in Russia, 3-9 July 2022Former HR Ombudsman Lyudmyla Denisova on her dismissal, 4 years of work, Ukrainians in occupied areas“We can't clean ourselves from the blood” – digest of Russian protestsRussia uses abducted Ukrainians for propaganda video claiming Ukraine is bombing ‘liberated’ Melitopol
• Topics / Law enforcement agencies

Police ruin their own image 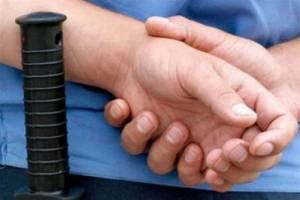 Donetsk analysts and human rights workers concur in their view that the police are not coping with their law-defending function and are to blame for their bad image.  In an April survey carried out by the Academy of Sciences Institute of Sociology, only 1% of respondents said that they fully trust the police.

Distrust is on the increase, and there is greater dissatisfaction with duty police officers in the East of the country, than in the West – 32% against 29%.

The image of the Donetsk police suffered the most during Euro-2012.  Then Yury Belikov from Donetsk who was drinking beer in a public place was detained by the police. They beat him up and raped him with a stick, leaving him permanently disabled. Only one police officer in the trial at first instance level received a prison term for inhuman treatment.

Nor did the police demonstrate professionalism during the conference Tech Camp Donetsk 2.0 held with the support of the US Embassy in Ukraine. Then in April, around 100 aggressive people burst into the Isolation Art Centre where the event was taking place.

Head of Donetsk Memorial Oleksandr Bukalov periodically carries out monitoring trips to police stations and SIZO [remand centres]. He explains the low level of trust in police as being because their behaviour does not comply with elementary standards. People know from experience, he says, that it can be risky to end up in a police station.  He adds that the police management protect their subordinates, since if they don’t within a few months there’ll be nobody left.