NGOs express concern over freedom of speech in UkrainePolice who refused to help journalists under attack get warnings and reprimandsStop Censorship vows to make the authorities investigate attack on journalistsWhose circus, Mr Prime Minister?Interior Minister blames opposition for attack on journalistsMore condemnation of police inaction as journalists attackedJournalists protest over „antifascist” assaults and police inactionDangerous “antifascist” cardThugs assault journalists while police look onOn the danger and cynicism behind the “anti-fascist” events planned for 18 MayUses and abuses of far-right electoral gains in UkraineDangerous AllianceDividing TacticA High price for disillusionmentFor those who couldn’t returnThe Limited Force of Fine WordsTerrible DeceitTrial by HeadlineOthersWithout labels
• Topics / Freedom of expression

Yanukovych and Azarov top the Enemies of the Press list 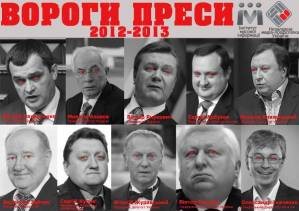 On Journalist Day the Institute of Mass Information and Independent Media Trade Union published their list of Press Enemies.

As the Head of the Government – for artificial restriction of communication between ministers and journalists and as formal head of the Party of the Regions – for pressure on the media, censorship and obstruction at all levels.

Azarov was in second place on the list in 2010

In tenth place in 2009 for threats against Serhiy Leshchenko, Ukrainska Pravda journalist and for insisting that all questions were agreed in advance

4. Party of the Regions MP Vitaly Zhuravsky (nominal author of the libel law which proposed recriminalization of libel

Arbuzov is believed to be the owner of a media holding including a number of media channels and publications. He denies this.

8 Opposition MP Mykola Knyazhytsky (former head of the independent channel TVi who supported the apparent seizure of the channel in late April.