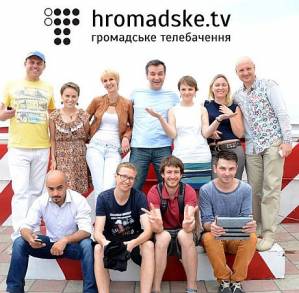 On 11 June a team of well-known journalists announced the creation of Hromadskie.TV, a public broadcasting Internet initiative based on the principles of transparency and total independence.

The journalists include many of those who left TVi in late April after the highly controversial takeover.

The idea to create Hromadskie.TV arose in March 2013, and its formal launch is planned for September.  At present organizational work is underway and the team being formed. During the presentation the journalists announced that they were planning to create a network of regional journalists to carry out investigations.

The plan is to have children’s programmes, music, etc, as well as socio-political programmes. The focus will be on investigative journalism.

Funding will come from three sources: donor organizations (grants); public support in the form of donations; advertising in keeping with the legal and conceptual model of the programme which is registered as a civic organization.

The journalists say that funding may also be taken from business organizations and politicians, but only if it is transparent, and the sponsors make no attempt to interfere in editorial policy.

A video (in Ukrainian) is available at hromadske.tv .  On the bottom right of the page there are lists of social networks with a message saying: If you want to help, become a friend!  As of 23.00 Kyiv time, 3, 359 people had like hromadskie.TV just on facebook.