Police officer gets long sentence for raping detaineePolice officers accused of torturing a detainee still at workSix former police officers sentenced over the killing of a detaineeNine prosecutions over the death of a detainee passed to the courtProsecutions over the death of a detainee in PrylukyHead of a Regional Department for Fighting Organized Crime dismissed over the death of a detaineeFirst suspects identified over the death of a man detained in custodyDetained man dies under suspicious circumstances in police custodyRussia unleashes new wave of terror and arrests of Crimean Tatars in occupied Crimea Crimean lecturer faces 5-year sentence for writing about Russia’s killing of innocent civilians in Ukraine Savage sentences against Crimean Tatar journalists for reporting on Russia’s ‘state terrorism’ in occupied Crimea Russian FSB officer charged over unlawful detention and torture of Ukrainian journalist Vladyslav Yesypenko Three life sentences and confirmation that Russia should be on trial for the shooting down of MH17 Fascism is here in Russia. Anti-war activities in Russia, 15-22 AugustOpposing the Orwellian State. Anti-war activities in Russia, 27 July-5 AugustJail or steep fines in Russian-occupied Crimea for playing a Ukrainian anti-war song or for saying ‘Glory to Ukraine’ 2,500 kms on Foot to Protest against the War. Anti-war Activities in Russia, 17-26 July 2022“Let’s Fight the Propaganda Together” Anti-war Activities in Russia, 9-16 July 2022“Do You Still Want This War?” Anti-War Activities in Russia, 3-9 July 2022Necessary conditions
• Topics / Against torture and ill-treatment

Statistics of Near Impunity 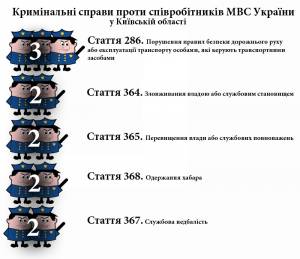 Valeria Burlakova writes in the journal Ukrainsky Tyzhden that suspended sentences and application of amnesties are standard practice in Ukraine for criminal cases against police officers.

Just getting a case against a police officer to the courts, she says, is already an incredible success. Of 114, 474 complaints about police behaviour received by prosecutor’s offices in 2012, only 1, 750 led to investigations and of these only 320 (0.2%) resulted in a criminal case being initiated.

The author notes that most prosecutor’s offices preferred to ignore Ukrainsky Tyzhden’s questions regarding the number of police officers against whom criminal charges were brought in 2012-2013.

According to the Kharkiv Prosecutor’s Office during 2012 18 criminal cases about offences allegedly committed by police officers of Kharkiv and the Kharkiv oblast were sent to the court.  The cases involved 30 people.

From January to March 2013 10 criminal proceedings were passed to the court regarding 10 police officers.

The Kharkiv Regional Prosecutor’s Office refused to give any information about the actual charges, claiming that this was at present internal information only.

The Chernihiv Regional Prosecutor’s Office also refused to provide specific information about charges but asserted that such analysis was not carried out. 5 officers had been prosecuted during 2012, and 4 had faced charges in the first quarter of this year.

There were only 4 cases in 2012 against 5 police officers.

Two were prosecuted on charges under Article 286 of the Criminal Code – traffic offences.

Two were charged under Article 365 (exceeding power or authority).

One was charged under Article 364 – abuse of power or position.

6 prosecutions have been passed to the court this year with respect to 6 officers.

Two are accused of taking a bribe (Article 369);

One with a traffic offence; and one with “abuse”

The article on “exceeding powers” is often used where NGOs would suggest others, including the article on torture.