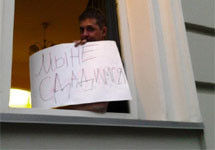 Late Friday evening Russian police took the offices of the human rights organization For Human Rights in the centre of Moscow by storm. Reports via twitter say that the head of the centre Lev Ponomaryov, as well as others who’d come to show support for the organization, were hurt as a result of the OMON officers’ rough treatment. According to the leader of the political party Yabloko, Sergei Mitrokhin, the FSB [Security Service] and OMON pushed Ponomaryov and him from the stairs.  He said that they had hurt his arm and leg and that he was awaiting an ambulance.

Another member of the opposition reported that all members of the NGO had been taken out of the office by force.

Earlier, the police had not allowed the members of the NGO and Mitrokhin to leave.  They also tried to stop the Human Rights Ombudsperson Vladimir Lukin, the Moscow Ombudsperson, lawyers Karina Moskalenko and others from entering.  Lukin was finally allowed in.  he said later that the dispute needed to be resolved in court.

For Human Rights, a movement including over 120 human rights organizations working around the country has occupied the premises on Malaya Kislovskaya since 1997.

Lev Ponomaryov says that his organization has a dispute with the city authorities over lease, but that there were no legal grounds for evicting them.  He told New Times that every 3 years he has had difficulties extending the lease and that at present they were paid up until the end of June.  He says that he received no  notification that the contract had been terminated.

During the day an attempt had been made to evict them. Ponomaryov and other members of the organization barricaded themselves inside.

Whatever the pretext, the actions on Friday night appear to be the latest part of a frightening attack on NGOs in Russia over recent months.

Information from Grani.ru, the BBC Russian Service and Radio Svoboda