PACE and OSCE withdraw direct criticism of Ukraine and Russia 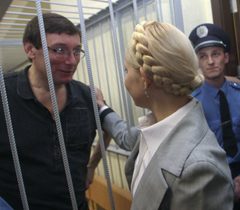 While the removal of direct reference to Tymoshenko and Lutsenko in the PACE resolution on broad abuse-of-office laws could be justified by the need for a general stand, OSCE withdrawal of a draft resolution on human rights in Russia cannot.

On Friday the Parliamentary Assembly of the Council of Europe [PACE] agreed the text of a resolution which states that “broad abuse-of-office laws for politicians are “problematic” and should be abolished or redrafted to limit their scope, while special procedures to impeach ministers should be in line with basic rule of law principles and applied with “extra caution and restraint”.

Politicians should as a rule be held criminally liable for acts or omissions in the exercise of their office when they “act for personal gain or violate the fundamental rights of others”, but should not be prosecuted for political decisions, which should be for the ultimate judgment of voters.
The resolution sets out a number of principles for distinguishing political from criminal decision-making, based on a recommendation from legal experts in the Venice Commission.
The parliamentarians also called on member states which have been condemned for violations of Article 18 of the European Convention on Human Rights (prohibition of misuse of power in restricting rights and freedoms) to take measures to ensure the independence of the judiciary and comprehensively execute the relevant judgments of the Court.

The original document mentioned Tymoshenko and Lutsenko, but was removed, apparently because it was felt the resolution should be general, with specific countries’ issues addressed in separate resolutions.

Ingrid de Caluwé from the Netherlands introduced the resolution, co-sponsored by 25 parliamentarians from 13 different countries.  It urged the Russian authorities to engage in a constructive dialogue with NGOs to reform elements of the legislation that was adopted last November requiring civil society organizations who receive foreign funding to register as foreign agents,