Bolotnaya Square Political Trial – A Step Back into the Past

Memorial condemns the trial now underway in Moscow as fundamentally flawed and reminiscent of the worst Soviet traditions, including attempts to find a “conspiracy” where there was none

Memorial has issued a statement regarding the court case over “mass disturbances” on Bolotnaya Square on 6 May 2012.

“This event would scarcely be attracting any serious attention if it were indeed a routine trial of demonstrators involved in clashes with the police.  Such clashes occur in any country. In democratic countries if these confrontations do not cause grave consequences they are not usually viewed as a serious offence since the right to take part in demonstrations is viewed as vital.

On 6 May 2012 nothing took place which warrants the term “mass disturbances”, neither from a legal, nor a layperson’s point of view. There were no serious police injuries, no broken windows; no overturned cases; no attempts to use weapons by demonstrators. The public has not been given any convincing evidence of criminal intent in the actions of the demonstrators.

There are on the other hand any number of examples of unprofessional actions by the police resulting in clashes and inappropriate use of police force.

During the investigation the Investigative Committee immediately and emphatically came out on the police’s side. The bias of the investigators; the exaggerated classification of the events by the investigative bodies; the crowds of investigators looking into a standard clash; the inappropriate detention measures imposed by the courts all in themselves deserve close public scrutiny.

However there is yet another sinister aspect of the “Bolotnaya Case”, reminiscent of our country’s tragic past – namely the search for a “conspiracy”.

Ignoring what is obvious and all commonsense, the investigators are trying to fabricate a group case and uncover a conspiracy where there wasn’t a whiff of one. In the worst national tradition, they are looking for a “foreign link” in the 6 May events – and finding one.  It turns out that unfriendly Georgia for the mind-blowing amount of 30 thousand dollars was planning to overthrow the Russian regime. This idiotic concoction which the successors to Dzerzhynsky and Andropov doubtless played a role in is shamelessly and in concentrated manner being pushed by the government-controlled media.

All of this forces us to think that the “Bolotnaya Case” should not be seen as an ordinary criminal case, but as a political trial.

The political motivation of the demonstrators’ actions was clear and in itself does not give any immunity from court prosecution where they did in fact break the law.

However the political motivation is also clear in the actions of the law enforcement bodies and this is categorically inadmissible. A fair trial should free the defendants and terminate the proceedings merely on the grounds that the investigation was run with bias and dishonestly, in the interests of the regime and not of the law.

Unfortunately all that has taken place so far in the “Bolotnaya Case” gives no grounds for hoping for a fair trial.

Whatever the outcome, this trial will demonstrate to the country and the world what kind of state Russia represents at the present time – a police state or one based on law. 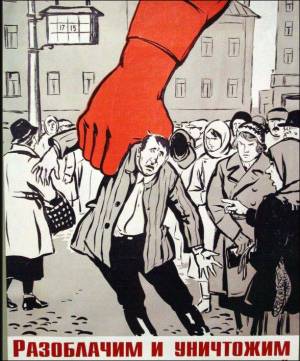 The Soviet poster from HRO, org reads: We’ll unmask and destroy them