More Clashes with police and protesters’ versions differing radicallyVradiyivka: Rule of Force rather than Rule of LawSecond police officer detained in connection with brutal Vradiyivka rapeVradiyivka residents storm police station after rape of young womanPolice officer gets long sentence for raping detaineePolice officers accused of torturing a detainee still at workSix former police officers sentenced over the killing of a detaineeNine prosecutions over the death of a detainee passed to the courtProsecutions over the death of a detainee in PrylukyHead of a Regional Department for Fighting Organized Crime dismissed over the death of a detaineeFirst suspects identified over the death of a man detained in custodyDetained man dies under suspicious circumstances in police custodyBerkut forces move focus from criminals to demonstratorsOutrage and police excuses over Berkut violence against journalistAssaulted journalists angered by whitewashing of passive police officersVradiyska Peaceful Protest Coordinator jailed for 10 daysVradiyska Peaceful Protest Coordinator’s jail sentence “revoked”2013 Record-breaker for anti-police protestFSB bans the last Ukrainian charity providing humanitarian aid in Russian-occupied MelitopolRussia bans Crimean Tatar leader Mustafa Dzhemilev for longer than he spent in Soviet labour camps
• Topics / Freedom of peaceful assembly 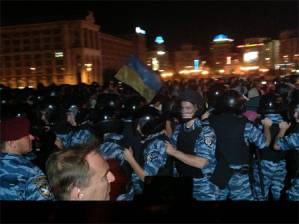 One of the protesters has informed Ukrainska Pravda that 4 busloads of Berkut special unit officers arrived at 23.30 and immediately surrounded the protesters.

People stood in a circle, singing the Ukrainian national anthem and chanting “traitors in uniform”; “death to the enemy” and “prisoner out” [presumably referring to the President’s two prison sentences as a young man - translator].

The scuffles lasted about 40 minutes.

The Berkut men dragged people away by the arms and legs.  One of the protesters was taken ill.  The officers also removed two tents. People were put into the coaches on which they’d come to Kyiv. One of the nationalists threw a smoke bomb.

While pushing people towards the Khreshchatyk metro station, a TV 5 camera was damaged. Prior to the events, a representative of the Kyiv Department for City Maintenance tried to hand the protesters notice that it was illegal to put up tents. The protesters however refused to accept the notice saying that they didn’t know who the owner of the tents was. They also disagreed with the classification in the notice that the tents were “a temporary architectural form”.

One protester explained that they were sports tents, which are not in any way fixed, and are therefore viewed as people’s property.

At 22.00 there were 130=150 people around the tents. Among them were mothers who came to Kyiv on Thursday to stand outside the Interior Ministry and tell them about police ill-treatment of their sons. There were people from Poltava and Kirovohrad who had joined the march and came to Kyiv on foot. There was nobody from Vradiyka.

Around 200 people had come out to express their anger at the actions of the police. Photo from here Facebook Ann Molchanova