Political Trials on the Career TrajectoryTymoshenko vs. Dead Souls and Dodgy WitnessesTymoshenko fined for “contempt of court”Concern over new charges against prominent opposition figuresTymoshenko case to be raised at EU-Ukraine SummitLet’s see if this one sticks?Die Zeit: Dirty Tricks against TymoshenkoSelective EvidenceFirst persona non grata over politically motivated trials in Ukraine?President recognizes Kuzmin’s “personal contribution”US urges release of Tymoshenko and LutsenkoLutsenko’s appeal rejectedLutsenko appeal ruling likely on ThursdayEuropean Court of Human Rights upholds ruling against Ukraine in Lutsenko caseLutsenko demands medical examination outside prisonLutsenko loses civil suit against prison administrationBan on Lutsenko’s correspondence a flagrant violation of the lawLutsenko’s life could be in danger in prison colonyU.S. Government Statement Regarding the Verdict in the Yuriy Lutsenko TrialLutsenko sentenced to another 2 years restriction of liberty
• Activity / Political persecution in modern Ukraine 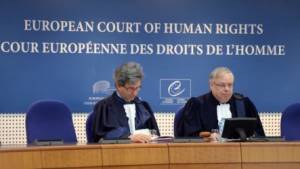 The Justice Ministry is asserting that the 30 April European Court of Human Rights judgment in the case of Tymoshenko v. Ukraine has been fully enforced and that the judgment does not impose any additional obligations on Ukraine.  Yulia Tymoshenko’s lawyer, Serhiy Vlasenko is reported by the BBC Ukrainian Service as calling this position legally unfounded and asserts that the former Prime Minister and opposition leader, in custody since August 2011 should be released.  Vlasenko refers to the fact that Ukraine is obliged to reinstate, as far as this is possible, the previous legal situation existing before the violation of the Convention.

The situation is, of course, different now as Ms Tymoshenko was sentenced to 7 years imprisonment in October 2011.  That conviction has been widely criticized as politically motivated, however the European Court of Human Rights judgment considered only the original detention.

As reported, the 30 April ECHR Judgment found three violations of Article 5 over Tymoshenko’s arrest and detention and of Article 18 in conjunction with Article 5.  It rejected by a majority, with three judges issuing a dissenting opinion, allegations of torture and ill-treatment under Article 3.

There was also another concurring opinion of significance given widely divergent assertions made about one vital aspect of the judgment.  The case was analogous to that of Yuriy Lutsenko with the Court finding that the detention had been for reasons other than those allowed by law.  Article 18 is extremely seldom applied since the Court prefers to assume that countries act in good faith.  Lutsenko’s lawyers had not alleged violation of Article 18, so the fact that the judges were unanimous in adding it left nobody in any doubt that the detention was seen as politically motivated.

With respect to Tymoshenko there was also unanimous agreement that there had been a violation of Article 18, however the wording of the actual judgment only alludes to a reason other than those permitted, i.e. her arrest and detention “had mainly served to punish her for a lack of respect for the trial court”.

Three judges, however, believed that “the reasoning of the majority does not address the applicant’s main complaint, which concerns the link between human rights violations and democracy, namely that her detention has been used by the authorities to exclude her from political life and to prevent her standing in the parliamentary elections of 28 October 2012.”  Their opinion points out that given the difficulty of proving political motivation, some degree of interpretation must be made.

Most people in fact did conclude that the “other reasons” for the Prosecutor’s application for Tymoshenko’s arrest and judge’s acquiescence were politically motivated.

Judge Rodion Kireyev is one of the prominent judges, prosecutors etc whose career seems to have taken off since his role in the Tymoshenko trial (more details here: http://khpg.org/1362262090)