Solidarity with Ales Bialiatski and all Victims of Repression in Belarus 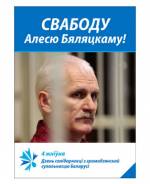 Two years ago today, on 4 August 2011, Ales Bialiatski, Head of the Viasna Human Rights Centre and Vice-Director of the International Federation for Human Rights, was arrested and subsequently sentenced to four and a half years imprisonment for supposed tax evasion.  The case has been widely condemned as an attempt to crush a prominent human rights defender and all those who stand up for democracy, rights and the rule of law in Belarus.

He was convicted over “tax evasion” in connection with accountsi opened and used to transfer money from abroad to Belarus to help victims of political repression, since Viasna was officially dissolved by the Belarusian regime in 2003.