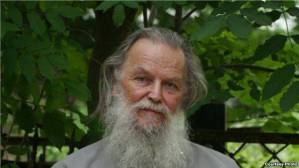 Father Pavel ((Adelgeim), well-known theologian, publicist and Soviet dissident has been murdered in Pskov.  Over recent years the 75-year-old had been critical of the situation in the Russian Orthodox Church and had recently stated publicly that the Pussy Riot members serving prison sentences over an anti-Putin demonstration in the Cathedral of Christ the Saviour should be released.

Father Pavel’s body was discovered on Monday evening. Yakov Krotov writes on Radio Svoboda that a Muscovite has been detained. The man apparently yelled out that Satan had ordered him to kill Father Pavel.

Father Pavel began a priest in the middle of the 1950s. He served in Central Asia.  He was sentenced to 3 years labour camp in 1969 for distributing samizdat, this being qualified as “anti-Soviet propaganda and agitation”.