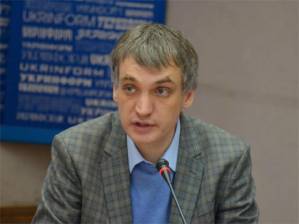 The funeral took place on Wednesday, 7 August, of Dmytro (Dima) Groysman, one of Ukraine’s most prominent human rights activists and Coordinator of the Vinnytsa Human Rights Group.

He died on Aug. 5 of a heart attack, brought on by an incurable heart defect.  He had written about his condition back in 2009, yet his death has nonetheless come as a terrible shock for most of us.  He was only 41, immensely dynamic, intelligent, relentless in argument and full of life. It is personally difficult to comprehend that he has gone, and a very real loss for Ukraine.

Dima studied medicine, later also law, but had spent the last 20 years defending human rights and victims of injustice in Ukraine.  He actively campaigned against the death penalty until the Constitutional Court declared it in breach of the Constitution in 2000; defended refugees’ rights and much more.  He was absolutely committed to his work, reacting swiftly and without compromise, to injustice. He was not cowered by authority and seldom saw any need to mince his words. This was seen most recently in his efforts to obtain the release from forced confinement in a psychiatric hospital of 70-year-old civic activist, Raisa Radchenko.

Roman Romanov from the International Renaissance Foundation and friend for many years described Dima as follows: “In our post-Soviet, predominantly conservative society, he tried through his words and deeds to limit what was prohibited, and extend the boundaries of freedom, often in the most uncompromising manner. There were many who condemned him for this, some hated him, others supported and liked him. He understood human rights at a deep level as a universal value and stood up for those rejected by the majority: refugees, prisoners, members of sexual minorities. He did so honestly and without ulterior motive”.

There are never any adequate words – neither words of solace for his wife Svitlana and son, David, nor ways of expressing the loss to those whom he helped, those whose rights he could have continued to defend.

There are however words of anger and frustration since Dima Groysman had been the target of absurd criminal proceedings since October 2010. There had recently been some positive movement in the case but the toll it took on him was undoubtedly great and almost certainly contributed to his premature death.  Over nearly three years he had faced 70 court hearings and had had to defend himself against idiotic charges.  The constant stress of these last three years was immense given the overtly dubious nature of the charges and the total unpredictability of Ukraine’s judicial system and of those with ways of influencing it.

The final hearing was held on Wednesday morning at the Vinnytsa City Court.  Around 50 friends and colleagues attended, many holding small placards reading: “The cops and prosecutors killed my friend.” Dima’s lawyer read out the speech which Dima had planned to read out himself.  The speech demolished all of the prosecution’s case and asked for an acquittal.  If convicted, however, he said that he should be given the maximum sentence since he had no intention of “reforming” and would spend his time defending other prisoners’ rights.

The verdict in this shameful case is due on Monday, Aug. 12, though it seems that the prosecution has now withdrawn some of the charges.  There were grave procedural irregularities in the case, and the very charges were so absurd that concern about the motives for this prosecution was voiced far beyond Ukraine.

The charges lodged back in October 2010 were under two articles of the Criminal Code. He was accused of “desecration of State symbols” (Article 338 § 1 of the Criminal Code) and disseminating pornography (Article 301 § 1). Among the very large number of worrying aspects of the case was the fact that the charges were based on material posted on his LiveJournal blog.

The police turned up on Oct. 16 at Dima’s flat. Although they only had a warrant to search his flat, they also carried out a search of the offices of the Vinnytsa Human Rights Group next door. The search was supposedly on suspicion of circulating pornography, yet the police officers confiscated financial and other documents, including material regarding asylum seekers whom the Vinnytsa Human Rights Group was assisting.

Exactly two years ago, the Leninsky District Court in Vinnytsa upheld Dima’s appeal against the prosecutor’s refusal to investigate the unlawful search of the VHG offices. There were other successes and yet the case continued, permanently hanging over Dima’s head, and presumably intended as a warning to other civic and human rights activists.

On Dec. 21, 2010, Dima received official notification of the charges he faced.

The image deemed a criminal offence can be seen here and dates back to July 2009. In June 2009 a number of human rights and media organizations had called on President Yushchenko to veto planned amendments to the Criminal Code criminalizing possession of pornographic material for the purpose of sale or circulation. The law was heavily criticized for failing to achieve its supposed purpose of fighting child pornography while at the same time imposing unwarranted restrictions on freedom of expression. Dima’s image was posted in disgust over the president’s failure to react in defence of children and of freedom of expression.

As mentioned, the image was on a personal blog, not the front page of a newspaper.  The argument that the blog was on free access  did not explain why a human rights activist was facing criminal prosecution, while countless sites inciting people to racial enmity, sometimes in radical form, were consistently ignored. The charges potentially carried a sentence of three years imprisonment.

There were two charges under Article 301 § 1, with the first relating to Dima’s entry here di-mur.livejournal.com. The clip showed people similar to some well-known Russian figures and was freely available for viewing on YouTube.

The mental acrobatics required to understand this last charge which supposedly relates to pornography, not annoying police officers, were beyond most of us. They were a strain as well to international NGOs, European Union officials and others who expressed strong concern over the charges laid against a prominent human rights activist.

Dima Groysman’s voice has fallen silent and some would argue that none of this matters. This would almost certainly not have been his view, and should not be ours. v