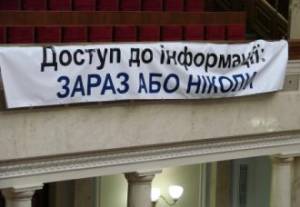 Protest by journalists in parliament: the banner reads "Access to Infrormation: Now or Never!"

Civic activists have warned that parliament and the courts are creating a dangerous precedent following the latest ruling from the District Administrative Court in Kyiv.  The court, under Judge Arina Lytvynova, upheld the refusal by the Verkhovna Rada Office to provide members of the public with copies of MPs’ income declarations.

The court thus rejected a suit lodged by Viktor Taran, Director of the Centre of Political Studies and Analysis.  He had asked for the declarations of the speaker and leaders of all party factions. The Verkhovna Rada office replied that Vitaly Klichko’s declaration was published in the newspaper Holos Ukrainy, and that it had sent the declaration of the leader of Batkivshchyna Arseny Yatsenyuk, at the latter’s consent to him by email.

Viktor Taran says he received nothing.  He adds that the declarations do indeed contain confidential information, such as place of residence, identification code etc. This information however could have been blotted out.

Viktor Taran plans to appeal against the ruling which he calls a dangerous precedent. He points out that the Public Information Act only really began functioning this year. If MPs learn now that they can continue to conceal information, then next year even fewer public officials will reveal their declarations.

Taras Shevchenko, Director of the Media Law Institute reported recently that it is virtually impossible to win law suits against Ukraine’s Parliament and Constitutional Court over failure to provide public information.

From a report at Liga.net