Kerch authorities accused of pressure on local mediaCriminal investigation over threats to Kerch journalistKharkiv journalist reports threatsFreedom of Speech in Ukraine – 2012End Impunity for violence against journalists!Police beat up journalist and civic activistLawyer dismisses traffic police ban on filming themHundreds die each year due to traffic police corruptionFighting corruption: fine words and hard-hitting reportsKerch journalists call for solidarity in the face of concentrated measures against themThere’s always a choice. Anti-war activities in Russia, 23-27 August Fascism is here in Russia. Anti-war activities in Russia, 15-22 August“I entered a store and burst into tears” — three weeks under bombardment in Mariupol ‘We were lying in the open air, shells were whistling overhead.’ A resident of Mariupol tells about the evacuation and the situation in the cityHorrific sentences against Crimean Tatar civic journalist and three members of one family for planted ‘prohibited literature’ Six-year sentence for reading the Bible in Russian-occupied CrimeaRussia claims its attack on Ukraine and seizure of 24 seamen are not the UN Tribunal's businessRussia launches a new trial of Crimeans over a terrorist attack that never happenedRussian military chief claims Ukraine is planning ‘provocation’ for military attack on occupied Crimea Record prison sentence for Christian faith in Russian-occupied Crimea
• Topics / Freedom of expression 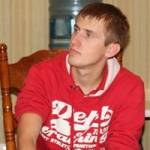 Mykola Ivashchenko, journalist from the website No to Corruption has formally lodged a complaint with the police following the events on Monday when a police officer detained him.  The journalist had arrived at the Kerch City Council at around 14.00 on Monday wanting to get the Mayor Oleh Osadchy’s comments about the protest over Kerch FM and alleged pressure on TVC Breeze.

He was detained by a police officer who tried to wrench Ivashchenko’s camera away from him.  When Ivashchenko began calling lawyers, the officer tried to take his mobile away. Other journalists were prevented from coming to the second floor and the police were called.  Mykola Ivashchenko was released only an hour after this “detention”.  No protocol was drawn up and seemingly no explanation given.

Both Mykola Ivashchenko and witnesses have reported the incident alleging obstruction of a journalist carrying out his professional activities (Article 171 of the Criminal Code.)  The incident has been recorded in the Single Register of Pre-trial Investigations and a criminal investigation initiated, provisionally under Article 171.  A police spokesperson informed Telekritika that an investigation was being carried out.  How much this is to be taken seriously remains to be seen.  It is notoriously difficult to get charges actually laid under Article 171.

As reported, the protest on Monday was in defence of media freedom following actions which many journalists see as an attempt to put pressure on media sources in Kerch.

Kerch FM came under a serious DDOS attack after reporting pressure by the Kerch authorities and disruption of the work of the television and radio company Breeze. It had warned that the moves could lead to 10 FM radio stations in the city stopping broadcasting.

According to Kerch FM, the authorities sent Breeze a letter informing them that they were terminating the lease agreement signed in 2006 for the land on which Breeze’s premises are located.  The letter was signed by the Deputy Mayor Sviatoslav Brusak and demands that the land be vacated by 12 August.

Since the land holds a radio tower serving 10 leading FM radio stations, these will all be totally removed from air.