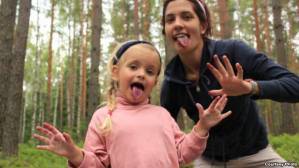 Nadezhda Tolokonnikova with her daughter, Gera

The two women have been locked up in some of Russia’s harshest jails since a court on August 17, 2012 handed them two-year sentences for performing a song critical of President Vladimir Putin in a Moscow cathedral.

In addition to the daily privations of prison life, the members of the feminist punk collective have endured unrelenting prison reprimands, solitary confinement, hunger strikes, and quashed court appeals -- deepening international outrage over what many denounce as a grossly disproportionate response from the Kremlin.

The past year has been no less agonizing for the women’s young children, Tolokonnikova’s 5-year-old daughter Gera and Alyokhina’s son Filipp, 6.

Relatives say Gera and Filipp sorely miss their mothers and are still coming to grips with the reality of their moms serving time in high-security prison camps.

Nikita Demidov, Filipp’s father, told RFE/RL that he chose not to keep the truth from his son following Alyokhina’s arrest in March 2012.

"I received a lot of different advice from relatives who are not used to speaking openly to children, " he said. "But I told him that his mother was in prison because she went to Christ the Savior Cathedral and sang too loudly there, and that some people were not happy about it."

According to Demidov, who lives with Filipp and Alyokhina’s mother in her Moscow flat, Filipp has rarely asked questions about the case since that conversation.

Several weeks went by before Alyokhina was allowed to see her family in pre-trial detention. To add to her anguish, investigators in charge of her case repeatedly threatened to take Filipp away and place him in an orphanage.

Their first prison exchange, which took place through a glass window, was highly emotional.

"He was frightened, and Masha [Maria] too, " Demidov said. "The first 30 minutes they could not even speak to each other. Masha started crying and turning away. At the beginning, it was very difficult for her to talk or even write about Filya [Filipp]. When I broached the topic, she would say it was just too hard for her."

Since Alyokhina was formally sentenced last August, she has been allowed to reunite with her family several times for three-day prison stays.

More lengthy visits and restored physical contact have enabled Alyokhina and Filipp to finally pick up where they had left off following her detention.

The 25-year-old, who is currently held at a jail near Nizhny Novgorod, 400 kilometers east of Moscow, has followed her son’s progress as closely as possible over the past year.

She sends him letters and regularly calls Demidov to discuss Filipp’s studies as well as the child’s sports and arts classes, or to solve occasional problems with his health.

But each prison visit reminds Demidov how much the boy still yearns for his mother.
"When we first went to visit her, I was very surprised to see how full of energy he was, " he said. "I had not seen him like this for a long time. He was running up and down the corridor, playing football, shouting, it was impossible to stop him. Seeing his mother gives him strength. He really misses her."

Last month, a court rejected Alyokhina’s request for a deferred sentenced to care for Filipp. Tolokonnikova had a similar attempt quashed in court.  Little Gera’s life has also been turned upside down since her mother was jailed.

Tolokonnikova, 23, is serving her sentence at a prison in distant Mordovia, a region 500 kilometers east of Moscow known for its draconian Soviet-era prison camps.

On March 4, Gera celebrated her birthday without her mother for the second year in a row.

Unlike Filipp, Gera readily talks about her mother’s incarceration -- perhaps as a result of being drawn into the active media campaign waged by her father, Pyotr Verzilov, to release the jailed women. According to Verzilov, his daughter has come up with countless escape plans to free Tolokonnikova.  "For a five-year-old child who watches cartoons and reads fairy tales, this situation is a typical fairy tale, " he said. "There is a main villain and the forces of good battle him and his helpers. This villain has locked up Nadia [Nadezhda], and Gera must now figure out a way to save her. That’s how she perceives the situation."

Verzilov says his wife appears to be even more deeply affected by the separation. "The place where I live is surrounded by a high, thick fence with barbed wire. Soon you.. will come to see me in my fortress, " Tolokonnikova wrote to Gera in January ahead of a prison visit. "I will be allowed to be with you in a room and talk. Then they will take me away. But it’s alright, we will have to wait a little longer, and then they will let me come home to you forever."

Tolokonnikova, like Alyokhina, is due to be released on March 3 -- if all goes well, just in time for her daughter’s birthday.