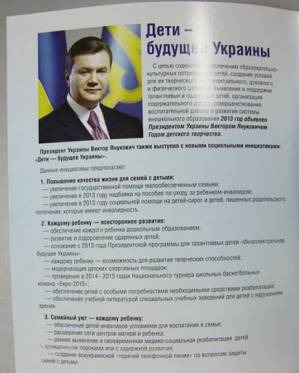 The website Argumenty Nedeli reports that the diary for Crimean school students drawn up by the Crimean Education Ministry is politically slanted. As well as a picture of President Yanukovych and his “social initiatives”, greetings from the Crimean Prime Minister Anatoly Mohylyov, and photos of various Crimean officials, there is also a photo of Party of the Regions MPs elected in single mandate election districts of the Crimea.

The material includes a description of “one of the areas of work of an MP”, this, according to the material for school kids, being: “purchase of sports gear; modern information technology; musical instruments for schools in the autonomous republic”.

The cover of the diary in blue and white is reminiscent of the Party of the Regions brochure seen during various election campaigns.

This diary is handed out free of charge to all students at general education schools in the Crimea on 1 September.