Assaulted journalists angered by whitewashing of passive police officersOutrage and police excuses over Berkut violence against journalistBerkut riot police disperse peaceful protest on Independence SquareMore Clashes with police and protesters’ versions differing radicallyVradiyivka: Rule of Force rather than Rule of LawSecond police officer detained in connection with brutal Vradiyivka rapeVradiyivka residents storm police station after rape of young womanPolice officer gets long sentence for raping detaineePolice officers accused of torturing a detainee still at workSix former police officers sentenced over the killing of a detaineeNine prosecutions over the death of a detainee passed to the courtProsecutions over the death of a detainee in PrylukyHead of a Regional Department for Fighting Organized Crime dismissed over the death of a detaineeFirst suspects identified over the death of a man detained in custodyDetained man dies under suspicious circumstances in police custodyCases of censorship and obstruction tripleNew political season brings journalists increased threats and intimidationImpunity Kills: 13 years since Gongadze’s murderUkraine only ahead of Belarus and Azerbaijan in freedom of speech ratingUkraine remains among countries with free Internet
• Topics / Freedom of expression 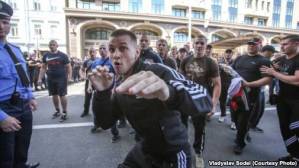 Olha Snitsarchuk commented on the arrangement reached to Radio Svoboda before sentence was passed. In her view the main thing is that three of the four defendants – Vadim Titushko, Serhiy Prykhodko and Mykhailo Pshuk - admitted their guilt with respect to both hooliganism and obstructing journalists in their work and publically apologized.

She mentioned an outrageous precedent in which a person had been fined 51 UAH [around 5 EUR] for breaking a journalist’s nose under the same Article 171 of the Criminal Code on obstructing a journalist.  This time, she stressed, the situation was entirely different with it being very important that the men had been convicted under Article 171. “In this agreement we stipulated the court terms for these guys, the material and moral compensation; the public apology to all journalists.”  She added that even if the men got suspended sentences on 2 September, she considered them to have been properly punished.

Titushko is to pay both Olha Snitsarchuk and her husband, Vladislav Sodel, both material damages and 11 thousand in moral compensation.  The money will be spent on others in need, and to help develop a civic initiative on public broadcasting.

As reported, on 18 May an “antifascist” rally was organized by the ruling party to counter the planned opposition rally “Rise Ukraine”.  While the two demonstrations passed peacefully, there were obvious attempts by hired thugs to provoke trouble.

During the afternoon Olha Snitsarchuk from TV Channel 5 and her husband, Vlad Sodel from Komersant Ukraine approached a group of VO Svoboda supporters coming under attack from around 50 athletic looking thugs.  Some of the latter first turned on Vlad Sodel when they saw him taking photographs then one began attacking Olha Snitsarchuk.   The police just stood and watched, ignoring requests for help (and the very obvious need to intervene).

showed a video in which this same alleged assailant, Vadim Tytushko, supposedly while still at liberty gives his account of the situation and asserts that he was hired to “protect the opposition”.   Zakharchenko claimed that the problems had been caused by athletic young men hired by the opposition. This did not explain why the thugs were attacking members of the opposition VO Svoboda party.

The three men who received suspended sentences on Monday clearly changed their story, and the Interior Minister has gone silent on the subject.