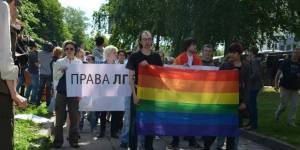 Ukraine cannot pick and choose which citizens should be protected from discrimination. Instead it must honour its commitment to develop a legal framework to combat homophobia and the EU must hold it to that commitment at every opportunity.”

Ukraine’s bid to persuade the European Commission to release the country from its commitment to legislate against homophobia is an unacceptable attempt to deny equal rights in the country, Amnesty International says.

“Ukraine cannot pick and choose which citizens should be protected from discrimination. Instead it must honour its commitment to develop a legal framework to combat homophobia and the EU must hold it to that commitment at every opportunity, ” said Denis Krivosheev, Europe and Central Asia Deputy Director at Amnesty International.

On Thursday Ukraine’s Parliamentary Commissioner for Human Rights, Valeriya Lutkowska, announced that she and a number of parliamentarians said they will travel to Brussels to persuade the EU to release the country from its responsibility to legislate against discrimination.

In June 2013, the Ukrainian government made a commitment to the EU that it would develop a legal framework to protect minorities from discrimination.

However, it later indicated it would not support a draft law aimed at outlawing discrimination on the basis of sexual orientation. The draft law which proposes amendments to, amongst others, the “Law on Employment” is due to be debated in parliament.

Amnesty International has repeatedly called on parliamentarians to pass this law, and also consider amending the “Law on Combating Discrimination” to include sexual orientation.

“The widespread social discrimination and violence currently faced by lesbian, gay, bisexual, transgender and Intersex people in Ukraine makes the need for a strong law all the more urgent, ” said Denis Krivosheev.

“At this critical moment in Ukraine’s future, political leaders should be showing the strength of character to lead a change in social attitudes and embrace universal human rights values. Instead, they are caving in to those who advocate hate by publicly making clear they are afraid to stand up for the rights of sexual minorities.”

Amnesty International is particularly concerned that Ukraine’s leading human rights authority, the Parliamentary Commissioner for Human Rights, is leading the attempt to exclude sexual minorities from the protection of the law.