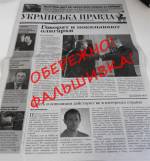 Taras Shevchenko, Director of the Media Law Institute, does not believe that the current campaign underway to discredit authoritative media sources will undermine the public’s faith in them.

“Ukraine’s faith in the media is rather paradoxical. I think that in fact they trust the media too much, especially television which is presently completely partisan and under oligarchs’ control.  Nonetheless this is the main source of information for a considerable number of Ukrainians. Far more Ukrainians believe the media than those in power. Can we talk of faith in the media being undermined?  I don’t think so.”

Shevchenko says that it is no surprise that 18 months before the presidential elections such a campaign aimed at discrediting the media has begun.

“Those in power or their representatives are clearly behind this. It’s not surprising that a year and a half before the elections they’ve begun making certain efforts to diminish the media’s impact, discredit it and simply unsettle publications. I think such thinks are planned as a long-term campaign.  Unfortunately, therefore, this will continue. Somebody is clearly spending vast amounts on trying to interfere with Ukraine’s information landscape.”

He points out that none of this is new, and that there have been numerous attempts to circulate fake runs of publications, leak overheard conversations where truth is mixed with fiction, in order to discredit the media.  Perhaps the only difference is in the larger scale and serious planning behind this new campaign.  He predicts that there will be other methods as well in this dirty campaign.

He suggests that an effective method of fighting such campaigns is to totally ignore any information about them since they in fact thrive on attention.

At the end of August and beginning of September newspapers were circulated in Kherson, Ivano-Frankivsk, Poltava and Kremenchuk with the same name and logo as the influential Internet publication Ukrainska Pravda.  The fake issue was on oligarchs’ media assets.  At the same time another site called Ukrainska Kryvda [Ukrainian Injustice”] was launched with design similar to that of Ukrainska Pravda.

There have also been a lot of scurrilous reports in the media about certain critical journalists, less often about media sources.  They all quote an “informed source” or “sensational documents”.  There were, for example, attempts to discredit the journalist Olha Snitsarchuk and her photographer husband, Vlad Sodel, after they were assaulted by Vadim Titushko and other thugs hired to “guard” the Party of the Regions “antifascist” demonstration on 18 May this year.