Cases of censorship and obstruction tripleTitushko and fellow assailants receive suspended sentencesAssaulted journalists angered by whitewashing of passive police officersOutrage and police excuses over Berkut violence against journalistBerkut riot police disperse peaceful protest on Independence SquareMore Clashes with police and protesters’ versions differing radicallyVradiyivka: Rule of Force rather than Rule of LawSecond police officer detained in connection with brutal Vradiyivka rapeVradiyivka residents storm police station after rape of young womanPolice officer gets long sentence for raping detaineePolice officers accused of torturing a detainee still at workSix former police officers sentenced over the killing of a detaineeNine prosecutions over the death of a detainee passed to the courtProsecutions over the death of a detainee in PrylukyHead of a Regional Department for Fighting Organized Crime dismissed over the death of a detaineeFirst suspects identified over the death of a man detained in custodyDetained man dies under suspicious circumstances in police custodyMyroslava Gongadze: The Day that changed UkraineRemembering Georgy Gongadze and other slain journalistsGeorgy Gongadze remembered; questions still unanswered
• Topics / The right to life
• Topics / Freedom of expression 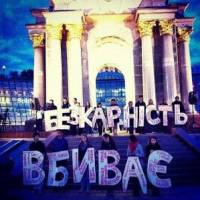 At a press conference on 16 September 2013, the 13th anniversary of the disappearance – and killing – of journalist Georgy Gongadze, journalist NGOs reported a considerable increase in attacks on journalists.

In a statement they point out that those who ordered the killing have never been officially named and that there is no progress on identifying those responsible, with only those who carried out the order in prison. No investigative activities were undertaken following the statement by Oleksy Pukach in which he accused former President Kuchma and Volodymyr Lytvyn of involvement.

The journalists say that those in power are continuing to use the Gongadze case for their own interests while leaving the question of who ordered the killing open.

“We also mark Remembrance Day for Slain Journalists. Unfortunately Gongadze’s killing has not given a proper lesson either to the authorities or to the public.  Physical aggression against journalists in Ukraine remains at a fairly high level. In 2013 the number of physical assaults and cases where legitimate professional activities are obstructed is at around the same level as during the 2012 election campaign.  It is almost three times higher than the number of such crimes recorded during the first half of 2012.

In 2013 the number of attacks on journalists by private individuals and by the enforcement bodies increased, while those by politicians and their assistants decreased.  According to Institute for Mass Information monitoring, there were 64 attacks or threats against journalists during the first 8 months of 2013, and 89 cases of obstruction. The main aggressors were private individuals (22 cases, against 23 for the same period in 2012); law enforcement and enforcement structures (15, whereas for the whole of 2012 there were only 8); and security guards and body-building thugs (12, against 8 for all of 2012). The increase in physical aggression may indicate that the assailants are not afraid of being punished.”

They cite figures confirming such impunity, for example, a pitiful number of cases (5) under Article 171 (obstruction of journalists) reaching the court in 2013.

The NGOs will be handing a petition to the Interior Ministry and Prosecutor General’s Office with a list of cases of physical aggression in 2013.  The petition calls for punishment of the assailants and for the public to receive a report on action taken. They add that in the middle of the October they will access the reaction of the authorities and the situation with impunity at a meeting with representatives of European and international structures.

They stress that defence of freedom of speech is not possible without support from the public and remind people of the meetings planned throughout the country on 16 September in memory of Georgy Gongadze and other slain Ukrainian journalists. They call on all who support freedom of speech and democracy to attend. 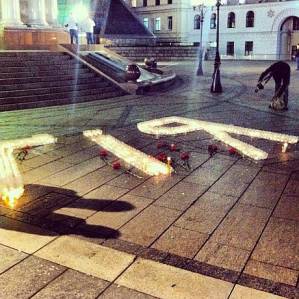