Donetsk authorities get 1 out of 5 for opennessStatement of solidarity: Aleksey MatsukaEditor in arson attack calls on President, MIA and Prosecutor to take the case under their controlStop Censorship and RWB demand thorough investigation into attack on Donetsk journalistCriminal investigation initiated over arson attack on Chief Editor’s homeArson attack on Donetsk editorStop Censorship warns Yanukovych of threats to freedom of speechPolice: search of Glavnoye offices linked to land law offences investigationAnother assault on freedom of speech under the pretext of “investigative activities”Yet another attempt to put clamps on freedom of expression?Threats against a Deputy or against Ukrainska Pravda?Media Union expresses concern over Internet snooping on OstroVPolice accused of seeking access to Internet publication’s serverDeputies vote to dissolve Parliamentary Commission on CensorshipParliamentary Commission on Censorship reports on worrying trendsPolice assault on Odessa journalistJournalists call on MIA to stop police arbitrary ruleStop Censorship condemns interference by politicians and top management in TV newsConflicting stories over removal of TV news item about the PresidentFreedom “Under PRESSure”
• Topics / Freedom of expression 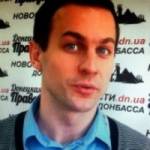 The Chief Editor of the Internet site Novosti Donbassa, Alexei Matsuka reports that he and another journalist, Vitaly Sizov, are being followed.  He writes that over the last month they have noticed a group of the same strangers showing a suspicious interest in them. There were a number of occasions in August and September when they definitely followed the routes taken by the journalists despite deliberate changes in direction when the latter realized they were being followed. Some of those following them have also been noticed at various times around the homes of the journalists.

Matsuka writes that they came under surveillance after winning a grant from the International Renaissance Foundation for a serious of regional investigations, as well as a US Embassy grant.

The journalists are convinced that the surveillance is solely linked with their journalist activities.

They recall the situation with Donetsk journalist Sergei Harmash in August 2012 when he warned in advance that plans were underway to try to frame him, and then that he had indeed ended up in a police station.  He wrote that the assumed scenario was that they were going to “find” drugs.

Matsuka and Sizov believe that the same thing may be tried in their case. They suspect provocation through supposed bribe-taking or a situation where one of them supposedly tries to extort money.

They are planning to approach the police and ask that they investigate the surveillance.  They ask their readers and the public generally to be aware of the situation and suggest that if anything happens it will be the result of planned provocation.