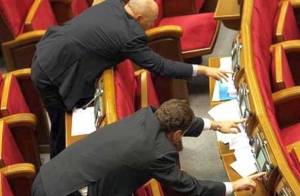 Ukrainska Pravda reports that ruling Party of the Regions MPs have called for protection from journalists in the press gallery. Their concern is supposedly about items accidentally falling, however the behaviour deemed so hazardous directly relates to videoing of Party of the Regions voting illegally for their truant colleagues.

Oleksandr Stoyan announced that he was authorized to speak on behalf of a group of MPs.  While asserting his respect for journalists, he said that he and his colleagues “must be protected from their accidental actions”.  There are big camera hanging above their heads, he explained from journalists in the press gallery. “Quite recently a cover fell and almost injured my colleague Vechirko”  They are demanding a screen or something to be erected to ensure their safety.

Speaker Rybak (also Party of the Regions) in turn pointed to a young man who he said had “almost fallen from the balcony” and was now again photographing.  He demanded that they “behave properly”.

It should be noted that certain independent MPs’ assistants and journalists watch how MPs vote from the balcony. They record all cases where “votes” are cast by colleagues of truant MPs.

At the beginning of September the head of the Party of the Regions faction Oleksandr Yefremov called on journalists to be careful and not accidentally injure somebody, while on 19 September he positively threatened criminal proceedings against journalists for any accidental injuries.

On Wednesday Rybak asked journalists to not stretch out too much.  The Institute for Mass Information notes that he said this after journalists videoed how MPs from the Party of the Regions were voted for absent colleagues.