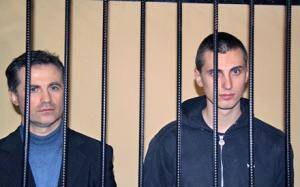 Following reports in the media that Serhiy Pavlichenko had tried to commit suicide after ill-treatment, the State Penitentiary Service has confirmed that Serhiy used a concealed razor and slashed his neck.  The Service claims, however, that this was protest at being moved to serve his sentence in a different oblast (Kharkiv).  The incident appears to have happened on 16 September, and has become known only because of the media reports, based on a VO Svoboda deputy’s assertion that he had been driven to the suicide attempt by torture.   The Service asserts that Serhiy Pavlichenko did not injure himself seriously and now regrets his action.

Serhiy Pavlichenko and his father Dmytro have been sentenced to 13 years and life, respectively, charged with murdering a Kyiv judge Serhiy Zubkov.  The prosecution asserted that Dmytro and his son had murdered Zubkov from the Shevchenkivsky District Court because the latter had passed a ruling on some land against them.  The same judge had, however, been responsible for many land-related rulings, some doubtless treading on the toes of developers by supporting individuals protesting against development projects in the centre of Kyiv.  He was also facing investigation by the High Council of Justice over other rulings. The ruling which the Pavlichenkos allegedly felt aggrieved over had, in any case, been revoked at appeal stage.  Dmytro Pavlichenko had been extremely vocal in publicly protesting his rights.

Despite grave doubts about the case, huge protests from football fans (Serhiy’s club mates and others), and difficulty in finding the motive convincing, the Kyiv Court of Appeal upheld the first court’s hearing on 2 August this year.

Serhiy Pavlichenko had asserted that his “confession” was extracted through torture and specifically electric shock. He also says that the police told him what to say during the interrogation and investigative experiment.  At his appeal, he asked the Prosecutor General to initiate a criminal investigation against the investigator of the Kyiv Prosecutor’s Office. He asserted that the investigator had falsified the material of the interrogation of a key witness.