A Trial with Grave Consequences 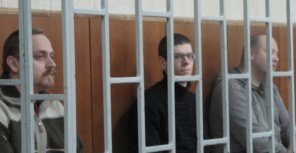 To the Head of the EU Delegation to Ukraine. Jan Tombiński

(The appeal can be endorsed by writing to halyapuff[at]gmail.com)

We welcome the EU’s unwavering stand regarding selective justice in Ukraine and can only wholeheartedly agree regarding the primary importance of Ukraine’s commitment to rule of law.

It is for this reason that we are writing with respect to the trial of three men accused of a bomb blast in the Zaporizhya Svyatopokrovsk Orthodox Church on 28 July 2010.  Any situation where the outcome of a trial is widely believed to be dependent on promises given the President and not on the guilt or innocence of the defendants is a direct threat to the development of rule of law in Ukraine.

In the so-called “case of the sacristans” there is no evidence against any of the three defendants, only seven “confessions” which all retracted as soon as they received access to proper lawyers, not the passive “defenders” called by the investigators.

The first young man, Anton Kharytonov, a suspended sacristan of the church, was taken to the police station the morning after President Yanukovych was shown on national television ordering the heads of law enforcement bodies to find the culprits within a week. The protocol of detention was, however, only drawn up immediately before his first confession around midnight and night interrogation.  Over the following days Anton wrote another three confessions.

His brother, Serhiy Dyomin, was held in custody from that same evening, 30 July 2010. A day later, during a night interrogation, he confessed to making the bomb.  When specialists placed in question his knowledge and ability to do so, he made a second, quite different confession, this time to having bought the explosive device “from an unidentified individual”.

A large number of procedural violations arouse concern in this case. Despite serious grounds for believing that the young men’s numerous confessions were obtained through torture, threats and other psychological pressure, there has never been an investigation.

On the contrary, when two forensic psychologists from accredited institutes (Donetsk and Luhansk) provided assessments confirming that all men had been placed under psychological pressure and had not given evidence independently, without being asked leading questions, Judge Minasov simply ordered a third assessment.  That found no pressure, but detected an “inclination to criminality”.  The defence’s application to have all three forensic psychologists questioned in court to ascertain the reason for such divergent assessments was turned down.

It should be noted that the very considerable changes to the indictment made almost two years into the trial removed specification of time, since the three all had alibis.  None of this elicited any objections or comment from Judge Minasov.

On 2 April 2013, despite a number of violations which have already, in analogous cases, led to European Court of Human Rights judgements against Ukraine, Anton Kharytonov and Yevhen Zakharchenko were sentenced to 15 years imprisonment; Serhiy Dyomin to 14 years.

We are convinced that EU attention to this disturbing case and the presence of a representative of the EU Delegation to Ukraine at the Appeal Court hearing on 1 October 2013 would give everybody, including the Ukrainian public, a clear and extremely important message.