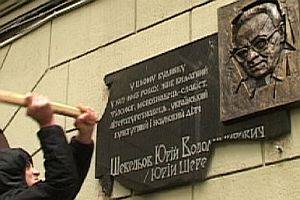 The Association of Jewish Organizations and Communities (VAAD) and Congress of National Communities of Ukraine have issued a statement expressing outrage “over the contempt shown by the Kharkiv local authorities towards the right of citizens to have their own values and view of the past.”

They refer to the destruction of “the memorial plaque to the outstanding Ukrainian scholar Yury Shevelyov” which was carried out in enforcement of the City Council’s decision and therefore an act of vandalism sanctioned by the authorities.

Yury Shevelyov, Professor of Harvard and Columbia University; a foreign member of the Ukrainian Academy of Sciences; President of the Ukrainian Free Academy of Sciences in the USA; member of the American Linguistic Society, Polish Institute of Art and Science in the USA, honorary PhD from the Alberta and Lundsk Universities, the Karazin Kharkiv National University, the National University of Kyiv Mohyla Academy and laureate of the Shevchenko Prize has been subjected to a boorish and uncivilized trial by people whose ideals are communist reprisals against dissidents.

Shevelyov, whose parents were descended from noble Moscow families of ethnic Germans was Ukraine’s pride and glory in the world. It is precisely that which so “concerns” Ukraine-haters who accuse a person from a level beyond their reach of collaborating, without understanding what the civilized world has already understood and given its assessment of – the “spiritual” unity of Nazis and communists.

We consider that the decision of the Kharkiv authorities undermines attempts to create a modern Ukrainian nation which is proud of all outstanding Ukrainians regardless of their ethnic origin, political choice and country of residence.