One question too many 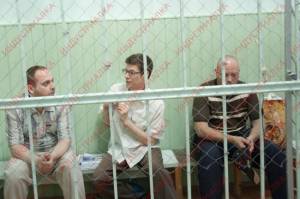 A court has finally noticed irregularities in the trial of three young men over the 2010 bomb blast in the Zaporizhya Svyatopokrovsk Orthodox Church.  One infringement was too staggering, in fact, to not notice.  During the second hearing into the appeals against 14 and 15 year prison sentences it transpired that fundamental changes made to the indictment just months before sentence was passed had not been formally recorded and properly communicated, together with the grounds for the changes, to the defendants and their lawyers.  Presiding Judge Y. Boikov quite understandably asked which indictment the defence lawyers were appealing against.

As reported here (rather more than once) the so-called “case of the sacristans” is of immense concern for a number of reasons. These include the lack of any real evidence and construction of the case around multiple confessions which all three defendants have retracted and say were extracted through physical and psychological pressure.

The trial which dragged on for almost two years also gave serious grounds for fearing that the men’s right to a fair trial was being violated.

In December 2012 Prosecutor A. Kmet suddenly made an application to the court to change the indictment with respect to all three defendants – former sacristans Anton Kharytonov and Yevhen Fedorchenko, as well as Serhiy Dyomin, Kharytonov’s brother.

According to the Criminal Procedure Code, the Prosecutor does not “apply” to the court, but issues a resolution which fully outlines the new indictment and the reason for the change. A copy of this is, according to the law, passed to the defendant and his lawyer.

Instead, the Prosecutor made an application without providing any indication of his reasons.  Despite this Judge Volodymyr Minasov made no objections to the changes which, among other things, removed references to time.   The prosecution’s motives are not difficult to guess since all three defendants had unbreakable alibis for the time mentioned. Why the judge went along with this is another question.

It was a very long time before the three defendants received copies of the new indictment which was the document on which the defence based their appeals. On Oct. 1 it became clear that the case files do not have that amended indictment.

According to the letter of the law, this means that the verdict was passed on the three defendants without an indictment.

Up till now, there has been little suggestion of concern from the prosecution or judge Minasov for either the letter or the spirit of the law.

It is therefore cheering that the Zaporizhya Regional Court of Appeal has decided that such irregularities must be eliminated.  This is, unfortunately, a first in the case.

A check has been ordered before a new hearing is scheduled.

Anton Kharytonov, Yevhen Fedorchenko and Serhiy Dyomin have now been in detention for well over three years.  Public and media attention remains vital to ensure that the latest development does not turn into yet another delay tactic, conceivably to avoid negative publicity in the run-up to the Vilnius Summit in November.