Ukraine only ahead of Belarus and Azerbaijan in freedom of speech ratingCases of censorship and obstruction tripleTitushko and fellow assailants receive suspended sentencesAssaulted journalists angered by whitewashing of passive police officersOutrage and police excuses over Berkut violence against journalistBerkut riot police disperse peaceful protest on Independence SquareMore Clashes with police and protesters’ versions differing radicallyVradiyivka: Rule of Force rather than Rule of LawSecond police officer detained in connection with brutal Vradiyivka rapeVradiyivka residents storm police station after rape of young womanPolice officer gets long sentence for raping detaineePolice officers accused of torturing a detainee still at workSix former police officers sentenced over the killing of a detaineeNine prosecutions over the death of a detainee passed to the courtProsecutions over the death of a detainee in PrylukyHead of a Regional Department for Fighting Organized Crime dismissed over the death of a detaineeFirst suspects identified over the death of a man detained in custodyDetained man dies under suspicious circumstances in police custodyFrom a Zwastika to "No to the War". Anti-war activities in Russia, 9-18 SeptemberThose who unleashed this war will not go to Heaven. Anti-War activities In Russia, 7-14 August 2022
• Topics / Freedom of expression 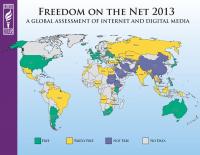 In the latest Freedom House report Freedom on the Net 2013, is given a Free rating for Internet freedom, but only Partly Free for press freedom (as per a different report).  The only good news, such as it is, is that aside from the Baltic States, it is ahead of all former Soviet republics except for Georgia.

From the report:  Freedom on the Net measures the level of internet and digital media freedom in 60 countries. Each country receives a numerical score from 0 (the most free) to 100 (the least free), which serves as the basis for an internet freedom status designation of Free (0-30 points),  Partly Free (31-60 points), or Not Free (61-100 points).

Ratings are determined through an examination of three broad categories:

Limits on Content: examines filtering and blocking of websites; other forms of censorship and self-censorship; manipulation of content; the diversity of online news media; and usage of digital media for social and political activism.

Violations of User Rights: measures legal protections and restrictions on online activity; surveillance; privacy; and repercussions for online activity, such as legal prosecution, imprisonment, physical attacks, or other forms of harassment.