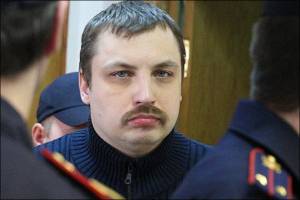 A Moscow court has found Mikhail Kosenko guilty of involvement in the supposed disturbances during an anti-Putin demonstration in May 2012 and ordered that he be placed against his will in a psychiatric hospital. The diagnosis of “sluggish schizophrenia” was commonly used during the days of Soviet punitive psychiatry.

Kosenko was found guilty of taking part in the disturbances on Bolotnaya Square on 6 May 2012 and of assaulting a police officer.   He had, however, been found mentally unfit, with a diagnosis of schizophrenia, and the prosecution did not ask for any fixed term.  Kosenko’s defence lawyers and family are appalled by the court order and say that this amounts to an indefinite sentence.

Mikhail Kosenko has been in custody since summer 2012.  His case was separated from that of other activists detained just as controversially over the events of that day.  There were indeed confrontations with the police that day, however protesters and civic organizations have repeatedly pointed out that the situation was exacerbated by the police forcing a huge number of people, protesting against Putin’s third term as president, into a confined area.

The diagnosis of «вялотекущая шизофрения» («sluggishly progressing schizophrenia”) has ominous associations with the worst years of punitive psychiatry in Soviet times.  Kosenko’s relatives are adamant that he does not need hospital treatment and are demanding a new psychiatric assessment.

The court ruling was met by those gathered outside the court with outrage and chants of “Freedom”!.  The police apparently detained those engaged in this entirely peaceful protest.

Kosenko’s case has been followed closely by a civic monitoring initiative OGON who found a large number of serious violations of his right to a fair trial.

This, however, is true of the Bolotnaya Square trials in general which Memorial has condemned as fundamentally flawed and reminiscent of the worst Soviet traditions, including attempts to find a “conspiracy” where there is none.  In a statement from July this year, it said: “On 6 May 2012 nothing took place which warrants the term “mass disturbances”, neither from a legal, nor a layperson’s point of view. There were no serious police injuries, no broken windows; no overturned cases; no attempts to use weapons by demonstrators. The public has not been given any convincing evidence of criminal intent in the actions of the demonstrators.

There are on the other hand any number of examples of unprofessional actions by the police resulting in clashes and inappropriate use of police force.”

During the investigation the Investigative Committee immediately and emphatically came out on the police’s side. The bias of the investigators; the exaggerated classification of the events by the investigative bodies; the crowds of investigators looking into a standard clash; the inappropriate detention measures imposed by the courts all in themselves deserve close public scrutiny.”  The full statement can be read in English here