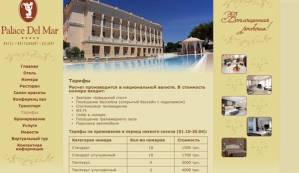 The five-star hotel in the Odessa oblast where the members of the Agrarian Policy parliamentary committee stayed while "meeting" at a nearby wine factory.  Some MPs have apparently asserted that they paid for their own accommodation

Serhiy Andrushko reports on Ukrainska Pravda  that while 87% of parliamentary committees last week treated the week set aside for committee work as time off with full pay, a few meetings did take place, mostly offsite, including in a wine factory.

4 out of 29 meetings actually took place.

The meeting of the Finance Committee which the Prime Minister’s son Oleksiy Azarov is deputy head of is particularly interesting. It was held in a bank in Odessa, the former workplace of MP Leonid Klimov who remains an honorary president of the bank.  Why the meeting took place in a private bank and what was discussed there remains unknown.  The committee is among those which don’t even have their own website.

The Committee on Agrarian Policy held their meeting at a wine factory in the Odessa oblast.

Andrushko asks some pertinent questions which are unfortunately unlikely to receive answers:

How are such out-of-town meetings run?

What is their aim?

Would it not be better to save the taxpayers’ money and hold them at their workplaces in Kyiv?

A film crew who tried to see how a parliamentary committee held at a wine factory is run were stopped by guards.  The MPs did not react to calls to stop such gross violation of journalists’ rights.

According to a programme photographed the event  included wine tasting, a concert and various other activities.

Andrushko writes that most MPs did not take part in any committee meetings. Instead of holding such meetings during the week set aside for such work, they tend to meet during the plenary weeks, often during breaks.  He says that such meetings usually last from half an hour to an hour.

Since there are usually two weeks in a month that are set aside for committee work, MPs are thus really onto a cushy number, all at the taxpayer’s expense since the MPs are paid generous salaries and allowances for such “work”.