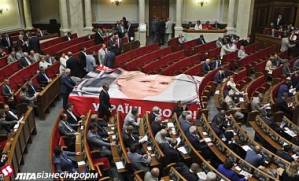 172 MPs including the heads of the three opposition parliamentary factions have called on President Yanukovych to agree to the request put last Friday by the Cox and Kwaśniewski Delegation.

The Batkivshchyna Press Service reports that the application points out that a number of world bodies – the European Parliament; the governments of the US, Canada, EU countries – have found the 7-year-sentence against the former Prime Minister and opposition leader, and other criminal charges brought against her – to be politically motivated and unacceptable selective justice.

The MPs point out that for the international community Tymoshenko’s imprisonment and exclusion from the political scene are the main obstacle to signing the EU-Ukraine Association Agreement.  They call on Yanukovych to release Ms Tymoshenko and ensure her full legal and political rehabilitation.

This, they believe, will make it possible to overcome authoritarian trends in the country and fulfil Ukraine’s European choice.