Election campaign begins in problem electoral districtsCVU warns of possible vote-buying in 5 problem constituency re-runsParliament sets date for long-overdue election re-runsCVU:: Re-elections no earlier than autumn, if at allBypassing the Voters: on the Ousting of the Mayor of CherkasyWin the elections or end up imprisoned?Court enables extradition request of opposition politicianOpposition candidate arrested in Italy on extradition demandOPORA: Former parliamentary candidates are leaving the countryOpposition candidate in scandal-filled No. 94 appeals to StrasbourgOPORA: Analogous cases, different court rulingsOPORA: The Elections did not meet democratic standardsUS calls Ukrainian elections a step backwardsOSCE: Democratic progress appears to have reversed in UkraineChernenko: "These elections the worst since 2004"ENEMO notes regress compared to previous electionsInternational observers: Serious doubts about elections’ fairnessSchulz on Ukraine: need to overcome stalemate in EU ties despite vote shortcomingsDodgy Election Techniques: Keeping the Voter uninformedCVU reports first infringements in Donetsk region
• Topics / Elections

2013 election campaign could get dirty after Vilnius 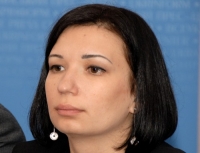 In an interview to Radio Svoboda, Olha Aivazovska from the election watchdog OPORA spoke of her expectations for the re-run of voting in 5 problem constituencies.  As reported, the election campaign began on Oct. 16 with Election Day on Dec 15.  .

She explained that a particular feature of this campaign which is shorter than usual is that virtually all the opposition candidates are known, whereas the candidates from those in power have not been officially named.

Aivazovska predicts that the campaign will be much more peaceful until the Vilnius Summit and assumes that problems will begin with the formation of district electoral commissions.

These 5 re-runs are specific, she says, because their organization and announcement are connected with political-legal and diplomatic arguments from the Ukrainian authorities.  There is also the fact that the majority of opposition candidates are known.  She mentions that the candidate for No. 94 electoral district in the Kyiv oblast is abroad and will not be able to personally submit his documents for registration.   (opposition candidate Viktor Romanyuk see Win the elections or end up imprisoned?)

She was asked how transparent this election campaign would be and whether the government would try to make it so because it’s taking place on the eve of the Vilnius Summit.

Aivazovska points out that the actual vote will be taking place three weeks after the Summit and that that period is the most critical for quick election campaigns. “Therefore up till Vilnius we’ll have a much more peaceful campaign than after it. It’s also in the interests of these elections to sign the Association Agreement so that this contact with European values and the community remained up till Election Day and didn’t vanish”.

While the fate of these five electorates may not change the political balance in parliament, their results can be a strong psychological factor for the 2015 presidential elections.  She calls these elections a challenge.  They could, on the one hand, mobilize the opposition on the eve of the presidential elections. They could, on the other, reassure the government on the eve of the Summit regarding aggressive or active behaviour during the elections, as was the case in 2012.

OPORA has listed risks and challenges of this election campaign.

They say that these are only partially linked with election legislation and procedural guarantees for its proper application.

The main factors which could impact upon the running and outcome of the elections:

“The formation of district and precinct electoral commissions will be the first test of the level of political pluralism at the re-runs, and their ability to remain impartial. The present procedure for a one-off draw for all district commissions could lead to the domination on the commissions of “technical candidates”.  If a number of these are then replaced, OPORA warns, this could have an adverse effective on the ability of the commissions to properly prepare and run the elections. This was a major factor in the problems in these districts in 2012.

Another area of concern is the lack of transparency regarding the financing of the election campaign.