Veche instead of compliance 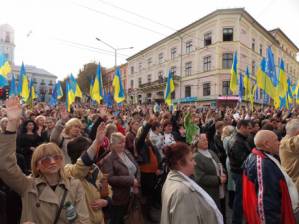 With three weeks remaining for Kyiv to demonstrate commitment to European integration by releasing Yulia Tymoshenko, the authorities have laid on a thousand-strong “Veche” (people’s assembly) instead.

In Chernivtsi, 8-10 thousand people took part in the Veche, brought in from various parts of the oblast, civic and cultural organizations. Ukrainska Pravda suggests they were paid, however it is also typical for public sector workers and students to be intimidated into taking part. People held flags of Ukraine and of the EU, while young people handed out a draft Appeal from participants of Veche 2013 to the Ukrainian people, the president and to the leaders of the EU in support of Ukraine’s European integration.  After this appeal was duly “passed”, the event concluded with a festive concert.

Maxim Burbak, an MP from the opposition Batkivshchyna party expressed outrage that a people’s veche in Bukovyna had in fact been organized by the authorities.  The initiative should come from the people themselves. Instead, he says, the initiative for mass events in support of European integration came from the President’s Administration.