Association Agreement: If not now, never 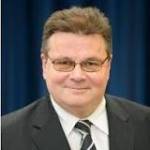 Lithuania’s Foreign Minister Linas Linkyavichus believes that if the EU and Ukraine cannot find consensus by November, after the Vilnius Summit the signing of the Association Agreement may well be in question.

“I personally think that if we don’t do this before the Summit, its continuation will be highly doubtful.”

He stressed that the Agreement marks an extremely important and responsible stage for Ukraine.  The issue, he says, is about major strategic plans which will not only have a positive impact on Ukraine’s economy, but are also of major geopolitical significance. “We can’t act as though this is simply a technical process which can, say, be postponed until the holidays, until Christmas or after Christmas. We need to do everything in time, especially since this is only the beginning”.

On Wednesday, he also stated that the Ukrainian government had yet to demonstrate progress in resolving the issue of selective justice.