Regions Party propaganda not on the curriculum 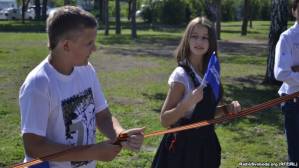 A Luhansk resident has taken the authorities and the Party of the Regions to court because his school student son was forced to take part in an event which he believes to have been a pretext for promoting the Party of the Regions.  Radio Svoboda reports the latter as asserting that the events are about developing patriotism and that other political parties could get involved.

The law suit has been lodged by the head of the Postup [Progress] Human Rights Centre, Kostyantin Reutski.  His son was taken away from classes and sent to take part in an event marking the liberation of the Luhansk oblast from the Nazis on September 3 (1943).  Oleksandra Dvoretska, a lawyer from the Crimean Human Rights Centre “Action” is representing the claimant in court.  She explains that the kids were not told anything about the Nazi occupiers and were given Party of the Regions flags and other insignia.

The aim of the suit is to get the practice of using kids for political purposes declared illegal and stopped.  Reutski points out that such events are in clear breach of Article 8 of the Education Act which bans involvement of children in political or religious events. He stresses that nobody warned the kids or their parents that the event was taking place under the auspices of the Party of the Regions,   The human rights activists say that they will go to the European Court of Human Rights if necessary.